A John Hopkins researcher says that the wealthy do not choose choice.

The conclusion comes from research by Julia Burdick-Will who has a joint appointment in Sociology and the School of Education. "Neighbors but not Classmates" has just been published, and while the conclusions we can draw from it are pretty narrow, it offers an interesting tidbit of anti-conventional wisdom.

Burdick-Will took a look at 24,000 rising ninth graders in Chicago. In neighborhoods with median income over $75,000, the students attended one of two or three schools. In neighborhoods with median income under $25,000, students were divied up among around thirteen different schools. This chart from the news release about the report pretty well gets the idea: 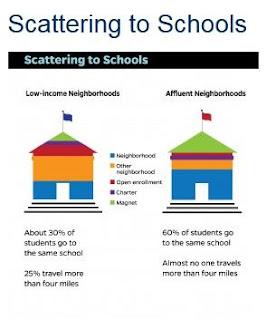 Burdick-Will gets in a couple of good quotes:

We think of children in poor neighborhoods as ‘stuck.’ But they’re not stuck in one geographic place. They’re stuck navigating a complicated and far-flung school system.

I see a couple of caveats for this report. One is that we're only looking at one high school grade, and only in Chicago. The much larger one is that we're looking at 2009. On the one hand, the landscape may have changed in some significant ways in the six years since then. On the other hand, as Burdick-Will notes, that also means that all the talk we've been subjected to about how the poor are "trapped" in their "failing" neighborhood schools has been, at least in Chicago, high grade baloney.

Burdick-Will notes the costs in social capital (something that poor neighborhoods already lack) that come with students who have to navigate cross town, often alone, to schools where they know few folks. And she also underlines the obvious-- what the wealthy really want, and get, is a good school in their neighborhood.

“We think of choice as a thing of privilege,” she said. “But what we see is that there is a privilege of not having to choose.”