This is how a public school loses the support of rational humans with brains.

On the heels of a Slate piece last week reminding us about how the juvenile justice system "eats kids for breakfast," today we get the story to go with this photo that's rocketing around the interwebs. 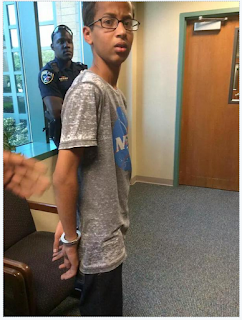 Because I'm only a fake journalist, I can drop any pretensions of impartiality-- everybody involved in this was a dope.

The English teacher who freaked the hell out over a home-made clock was a dope.

The police who put this 98-pound ninth grader in cuffs was a dope.

The police who was quoted as saying that Ahmed Mohamed was "less than forthcoming" was a dope. Honestly, you've just been arrested for an engineering project-- you can't possibly predict how the words out of your mouth will be interpreted. You came to school and said, "I've got a clock" and the school screamed, "He's got a bomb!" At this point, as far as you know, "I'm thirsty" will be met with "He's taking hostages and making demands!!"

The school-- MacArthur High School of Irving, Texas-- responded quickly with a letter, and whoever actually wrote the letter was also a dope.

While we do not have any threats to our school community, we want you to be aware that the Irving Police Department responded to a suspicious-looking item on campus yesterday. We are pleased to report that after the police department’s assessment, the item discovered at school did not pose a threat to your child’s safety.

Well, there is one threat to your child's safety-- there's always the possibility that school and law enforcement officials will absolutely lose their shit because some child brought an engineering project to school.

But the letter goes on to explain where the real burden lies-- on the parents and children. "I recommend using this opportunity to talk with your child about the Student Code of Conduct and specifically not bringing items to school that are prohibited." Because I'm sure that the list of prohibited items includes home made clocks!!

Seriously-- look at this kid and consider just how anybody could conclude he's a credible threat.

I hope that MacArthur High School and the local police experience a huge, burning, thorough national embarrassment. I hope they have an opportunity to look themselves in the eye and say, "Damn, we acted like a bunch of dopes."

In the meantime, MacArthur High might want to consider the high irony of touting its recognition for its use of cutting edge technology and amending its STEM initiatives to include the warning that while it's cool to invent things, you probably shouldn't show any body.

Would Ahmed have been better off with another name, heritage, and skin color. No doubt. But the whole school and community would be better off with less Just Plain Stupid behavior.

I know there will be people trying to be uber-reasonable and saying, "Well, you know. Maybe there's more to the story." I don't think so. I can't imagine any context in which the behavior of the teacher, the school, and the police is excusable. Okay, maybe if Ahmed had previously tried to blow up the school --or fake blow up the school (in some versions of the story they're now accusing him of a "hoax bomb" because handcuffs are always the best response to a prank, which this clearly wasn't and damn-- I can't even) which would clearly have been brought up by now if it were true. So, no. No, there's no circumstances that make this treatment by a school of a student in their charge okay, at all, even a little.