Should Teachers Stick Around

At Bellwether, Chad Aldeman wants us to know that the classic teacher retirement plan "shortchanges teachers."

His point is a two-parter, and you can follow link one and link two to read his briefs at length if you like. But I think we can hit the drift of his gist pretty quickly.

Aldeman's argument is that it takes many years-- 25 (and he adds an exclamation point, like, good lord! can you even imagine someone staying in teaching for an entire twenty-five years!)-- for a teacher to have a pension that's worth as much or more than her contributions to the fund. When Aldeman says that the program shortchanges teachers, he actually means "teachers who aren't in teaching for an entire career."

It’s commonly accepted that public-sector workers such as teachers trade lower salaries for higher job security and more generous benefits. But that trade only works well for the small minority of teachers who actually stick around until retirement.

I would argue that the pension set-up is long-term as an incentive for teachers to be teachers for the long haul, that like seniority protections and job security and the other features of employment, it helps foster what society has traditionally wanted-- teachers who become proficient and give the community the benefit of their well-developed skills for generations, and not just a year or two. Schools have traditionally been stabilizing institutions in their communities, and having a stable teaching force is central to that goal.

Aldeman's point rests on this charter, which shows that only 25% of the teaching force sticks around to get their pension. 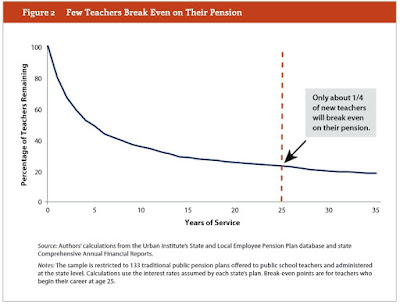 This is as severe an attrition rate for teachers as I've ever seen, though it initially matches up with the old 50% of teachers leaving within the first five years figure (even though that figure has been questioned). So the math in this may be very arguable.

Aldeman is not arguing that's a bad thing, but seems to feel (!) that a lifelong career in teaching is neither normal nor desirable.

That's not an unusual reformy position, though Aldeman has not been one of the vocal proponents of the Short Career Model. In the Short Career Model, we pay some teachers big money for a few years, and then cycle them out, either because they never planned to stick around in the first place, or because school management has the regulatory freedom to fire any teacher at any time for any reason-- including, "Sorry, Mrs. McTeachwell, but we want to replace you with somebody cheaper." Certainly part of the appeal of that approach is the low cost of pensions for the state and the schools.

Aldeman also seems to be leaning toward the Do-It-Yourself pension model favored by Social Security reformers-- just take some pension payments and go invest them yourself. It's popular because it's cheap and it is one more way for the rich to tell poor people, "Grab your bootstraps and leave me alone. I've got mine, Jack." And playing the market to manage your own pension seems totally safe-- I can't think of anything that's happened to the markets in the last decade that would seem like a red flag.

Personally, I would argue that the steep drop at the beginning is partly a loss of teachers, and partly a loss of people who thought they would be teachers and turned out, well, not so much. But that's both a mystery data argument and probably a bit of a linguistic leap as well.

Eventually we arrive at the bigger question-- do we want teachers to stick around for long careers? Or do we want to transition to the Short Career Model and therefor shift all of the benefits of a teaching career (well, except job security) to the front end? Do we want to keep incentives to become seasoned and experienced and to give the school system the benefit of that age and wisdom, or do we want to staff schools with an ever-churning roster of enthusiastic(ish) unseasoned newbs?

But the reports do sound a useful alarm in noting that many pension "reforms" or "rewrites" or "tweaking in hopes of avoiding one more financial screw-ups" are making the inbalance more so, and that many young teachers are becoming "net contributors," paying more into the system that they take out upon early departure.

The reports, however, report these issues as some sort of lottery-- teachers in Utah have a 50-50 chance of breaking even, while teachers in New Hampshire have a one-in-ten chance of making their pension money back. But this is not a lottery, and there's no "chance" involved-- you stay in the profession long enough to reap the full benefits of retirement, not unlike the vesting that occurs in other jobs. If you don't stick around, you don't get the full benefits.

This isn't unfair or cheating Short Term Teachers-- it's one more way that the system was built to encourage teachers to make a lifetime commitment to the profession and reward them for the choice, because once upon a time, we all agreed that such a choice was a Good Thing.

Of course, if the death of tenure and seniority ever really kick in, having a long career will be a lottery, and this will be a huge rip-off. But when the day comes that the Short Career Model is the law of the land, we'll have many things in the profession to restructure, not just pensions.