NC Can't Get It Right

Hard to believe there was a time when North Carolina embarrassed the rest of the South by showing them how education could be done right. Now they just seem intent on embarrassing themselves.

North Carolina has finally settled their eleven-week budget standoff. Now, as a Pennsylvanian, I can't poke much fun at that. Our legislature's budget failures are practically annual rituals, and while North Carolina just keeps operating under the old budget terms, here in the Quaker State we let the wheels of government grind to a messy halt while our elected leaders sit around failing to fulfill their most basic responsibility.

But the budget always reflects the values of the state, and North Carolina's budget hammers home yet again their disinterest in supporting their school system and a firm commitment to driving teachers out of their state.

The legislators did bump up starting salary for teachers to $35K. This is perhaps better understood in the context of the NC state teacher salary scale.

So on the left is where NC teachers were last year. It makes an interesting comparison to the previous year-- the new schedule has only six steps, so teachers get four years to slide backwards against inflation, until you hit twenty-five years, when you can just start drifting back forever. And am I reading this correctly-- did teachers with 33 years or more actually take a pay cut??

Of course, the real pay losses of the stalled steps would be offset by an increase in the whole scale, but that's not going to happen. Instead of a 2% raise for state employees, everyone gets a $750 bonus instead. So, peanuts for, as one writer put it, a tip. And you know the definition of bonus-- a pay benefit that your employer never has to give you ever again.

I have great admiration for the teachers trying to make a career in North Carolina. This sort of no-raise-for-you behavior has been the norm for too long down there, and the $750 tip is no more than a gesture, and not a very polite gesture at that. I expect that all across the state, many teachers would like to offer the legislature an impolite gesture of their own. 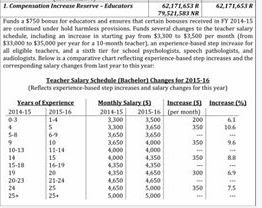