DeVos Stands Up For Testocracy

Thursday, Betsy DeVos issued a letter clarifying the Department of Education's position on postponing the Big Standardized Test this year, and it closes one of the few remaining gaps between DeVos and Arne Duncan. 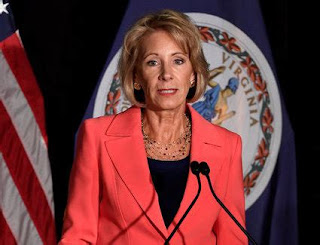 In a letter to chief state school officers, DeVos noted that there has been a pandemic. She thanked the school leaders for their efforts to meet the needs of all students (forgetting, perhaps, all the times she has recently claimed that most pubic schools haven't done a damn thing) and notes that some of the crew has been bringing up the issue of testing waivers for this school year.

The answer, she says, is a big fat "Nope." She expects that the BS Tests will be given. And she offers this:

As you’ll recall, statewide assessments are at the very core of the bipartisan agreement that forged ESSA. They are among the most reliable tools available to help us understand how children are performing in school. The data from assessments can help inform personalized
support to children based on their individual needs and provide transparency about their progress. There is broad and consistent support for assessments because there is general agreement among the public that a student’s achievement should be measured, that parents
deserve to know how their children are performing, and that it should be no secret how a school’s performance as a whole compares to other schools.

There's a lot of baloney in that paragraph. Who is the "us" in "help us understand how children are performing in school"? Because it's certainly not parents, who clearly do not sit around all year ignoring report cards and communication from teachers and direct observation of their own child, saying, "Once that BS Test score comes in, we'll know how the child is doing." DeVos is fond of saying that nobody knows the needs and capabilities of the child better than the parents, but apparently that's not entirely true if the parents depend on the BS Test score to know the child.  Maybe the "us" is bureaucrats and politicians, in which case we ask the question "why do they need to know?"

The tests are NOT the most reliable tool available; in some cases these tests, which may be poorly constructed and narrowly focused on just two subjects, are not even A reliable tool. The tests, given once per year and delivering only broad sketches of information, do NOT provide information useful for personalizing education. There is no "broad and consistent" support for the tests; there is an interest in useful data, but it is a huge leap to decide that the BS Tests provide any such data.

As for the notion that it should be easy to compare school performance--first of all, why should it be easy? Second, is there any reason to think that these tests actually make it easy? Third, how did we jump from measuring student scores to judging the school itself? A test made for one particular purpose cannot be used for anything else that pops into your head (send that memo twice to all the states using the SAT or ACT as their Big Standardized Test).

Make no mistake. If we fail to assess students, it will have a lasting effect for years to come. Not only will vulnerable students fall behind, but we will be abandoning the important, bipartisan reforms of the past two decades at a critical moment. Opponents of reform, like labor unions, have already begun to call for the permanent elimination of testing. If they succeed in eliminating assessments, transparency and accountability will soon follow.

Of course. If we stop weighing the pig, it will never gain weight. And because teachers oppose bad accountability, obviously they oppose any accountability at all.

And if all of this sounds familiar, it's because we already had all these conversation when Arne Duncan was secretary.

On Twitter, I somewhat glibly observed that there was no longer any Duncan policy that DeVos has not embraced. She has decided to go ahead and be the US school superintendent. She has gotten comfortable with using the levers in her office to circumvent Congress. And now she has landed hard on one-size-fits-all magical testocracy, which also brings her in line with the other Duncan fave-- Common Core. I mean, what does she imagine most of those BS Tests are kind of sort of aligned to, partly?

Matt Barnum pointed out that in my glibness, I overlooked items like DeVos's wholesale gutting of various protections that the Obama/Duncan administration put in place for students (though I will note that they weren't really any more aggressive about predatory for-profit colleges than she has been). I had lumped that under the heading of "acting like a national superintendent," but on reflection, I see that's cheating.

There is, in fact, one major remaining difference between Duncan and DeVos.

Arne Duncan certainly was [fill in your favorite Duncansian critique here], but he seemed to be widely viewed as a nice guy, and he never aggressively pursued policies that put corporate interests ahead of student interests (not saying he never did it, but he was never aggressively let-them-eat-cakey about it). But from the days that she sat in her Senate approval hearing making it clear that she could not imagine a situation of discrimination or mistreatment that would prompt her to actually use federal powers to protect student interests, she has made it clear that the little people can just go get stuffed. Duncan was often wrong, clueless, misguided, unsupportive of public schools, too tuned in to corporate privatizer interests, and ill-suited to the job-- but he was never flat out mean.

EdWeek has the winning response to DeVos's declaration of Nerts To You States:

Richard Woods, the state superintendent of Georgia schools, swiftly criticized DeVos' letter in a statement released Thursday. "It is disappointing, shows a complete disconnect with the realities of the classroom, and will be a detriment to public education," said Woods, an elected Republican.

The rest of his response is pretty good, too.

A lot of things can still happen before next spring's testing season rolls around, not the least of which could be the department being under new management. Kind of makes one wonder if the Trump/DeVos administration thinks more testing is a winning campaign platform. Let's hope the landscape looks a little different by the time 2021 rears its ugly head.