It was just last fall that we were all talking about Ray and Barbara Dalio and their big plans for helping education in Connecticut. Now, less than a year later, the dream is dying an ugly public death.

In many ways, the Dalios didn't look like the usual phauxlanthropic edu-dabblers. 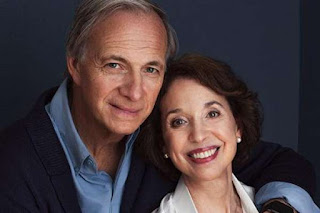 He is a successful hedge fund manager and the richest guy in Connecticut. She immigrated from Spain fifty-ish years ago and worked at the Whitney before settling into the mom-and-kids track. He has announced that capitalism is not working, and that income gap is a huge national crisis. When she decided she was interested in working on education, she started visiting actual schools. After a start working with charters and Teach for America, she pulled away and started supporting public schools instead through her philanthropies and organizations like Connecticut RISE. Teachers, even union presidents, describe her as humble, a good listener, "truly a partner."

In the spring of 2019, the Dalios offered up $100 million to the public ed system, to be matched by the state and, maybe, other Rich Folks. It was supposeed to be aimed at students in under-resourced communities. Even the state teacher union president said that public-private partnerships usually stink, but this one smells rosy.

But that rosy aroma faded fast. Dalio, for all his noise about the failures of capitalism, still thinks the solution is a visionary CEO at the top making the rest of the monkeys dance. The New Haven Independent argued, Dalio, whose company Bridgewater Associates has been the recipient of state largesse, was simply returning public money to the public.

And that pile of money came with all sorts of strings attached. The panel overseeing the pile of money was to be exempt from ethics and disclosure rules at Dalio's insistence. The GOP Deputy House minority leader's reaction was pretty on point:

"These corporate board-holders are going to go up to the balcony and sprinkle down dollars on, I guess, the peasants of Connecticut, and we’re supposed to be happy about that?” said Deputy House Minority Leader Vincent J. Candelora, R-North Branford.

Dalio has oft claimed that "radical transparency" was the secret of his success, but the Partnership for Connecticut wasn't going to be playing that game. The group met behind closed doors, locking out the public, the press, and five legislators who would have been bound by the Freedom of Information Act. Ray Dalio was not directly involved, but Barbara sat on the partnership board.

In March, the partnership hired Mary Anne Schmitt-Carey as president and CEO. She came with plenty of edu-reformy credentials, including work as senior director on the Goals 2000 project at USED and a decade at New American Schools, followed by 12 years at Say Yes To Education, Inc. Soon after, the partnership hired her for a hefty $247,500 salary.

Back in May, there was a flap between Barbara Dalio and the brand new CEO of the partnership to resign after six weeks. Well, "flap" might be too small a word. Schmitt-Carey complained of having been "ambushed" in a phone call that raised a bunch of allegations about her and threatened to go public if she didn't resign. She was placed on paid administrative leave.

Shortly afterwards, the Dalios pulled out of the partnership, "citing frustrations with partisan politics, news leaks and 'sensationalistic stories.'" As of June 5, the partnership was defunct. But their troubles were not over.

“A good reputation takes decades to build. I owe it to myself, my daughter,and other women to stand up and hold people accountable for their actions, even when there are billionaires involved,” said Schmitt-Carey last week as she filed a $2.5 million defamation lawsuit against Dalio's philanthropic group as well as her old Say Yes organization, plus two individuals who allegedly badmouthed her by spreading old Say Yes stories to her new employers.

The lawsuit alleges that she was not hired to actually decide anything. According to the suit,  “she had been hired to rubberstamp the silver-bullet programs chosen unilaterally by Dalio Philanthropies figureheads Ray and Barbara Dalio — despite those policies' dubious efficacy."

Furthermore, says the suit,  "Mr. Dalio went on to instruct Ms. Schmitt-Carey that her job was not to draw on the experience and knowledge she had accumulated during her long career but to take direction from Ms. Dalio regarding which programs should be implemented. As stated above, Mr. Dalio informed Ms. Schmitt-Carey, 'If my wife wants to distribute 10,000 coats, your job is to figure out how to do that.'" And it goes on to pointy as a "longstanding pattern of devaluing women" at Bridgewater.

Schmitt-Carey accuses Dalio et al of "wrongful acts involve abuses of wealth and power, misuse of a not-for-profit public-private partnership for private purposes, a chronic lack of transparency, a disregard for the reputations of others, and clear breaches of contractual duties."

So, this is going to be ugly. Ruth McCambridge at Non-Profit Quarterly leads her story about the mess with

NPQ would love to stop writing about failed partnerships between public schools and billionaires, but they keep getting started and running aground as fast as their benefactors pillage the economy.

The whole meltdown comes from letting rich guys "give" money without actually letting go of control of it. McCambridge called this back in April 2019 when she quoted Anand Giridharadas pointing out that "Dalio's personal preferences should have zero influence on how the money is spent" pointing out that "it puts some rich guy and the State of Connecticut on an equal footing to negotiate a plan to enhance the general welfare." McCambridge expanded on that idea:

Placing a rich hedge fund manager in a co-equal position with public governance is anti-democratic and, where the public schools are concerned, doomed to be counter-productive in terms of lived-out notions of equity.

Dalio, like many other modern phauxlanthropists, was not trying to give money away--he was trying to buy something with it, and he expected to be not a co-equal partner with the state, but the leading partner, the boss. Some rich guys buy their wives a car or tennis lessons; Dalio went a little further and bought his wife part of the state's official government function. It's not philanthropy--it's just hire and salary, with the expectation that the hired help will do as they're told. This is not how to fund or improve a state's education system.
Posted by Peter Greene at Saturday, September 26, 2020