MI: Teacher Fired Over Political Tweet. If Only There Was A Way Protect Against Such Injustice.

Be careful what you wish for.

Conservative media made a small summer meal out of the story of Justin Kucera, a 28-year-old social studies teacher/coach at Walled Lake Western High School.

The known facts of the story appear to be this:

On July 6, Kucera retweeted the Trump classic, "SCHOOLS MUST OPEN IN THE FALL."  He followed that with “I’m done being silent. @realDonaldTrump is our president … Don’t @ me” Further down the thread, he responded to someone with a "liberals suck, man." That tweet, which Kucera later characterized as a sort of light sarcasm, was later deleted, but the damage, apparently, was done. 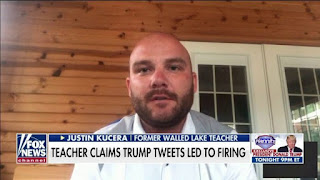 The district superintendent offered a bit of a subtweet on July 7, including "We believe in the importance of discourse, but we will not stand for speech or actions from those that represent our District that seek to divide or demean our staff, students, citizens."

Kucera was pulled into a virtual meeting with his administrators, the HR department and his union reps on July 10. They asked him why he tweeted those particular messages, and ultimately gave him the choice of resigning or being fired in a July 15 meeting. He chose not to resign, and the district fired him.

The district has maintained that they did not fire Kucera for boosting Trump, but Kucera has presented his story to many outlets as "I was fired for supporting Trump." Many folks have poked around the tweeterverse to unearth other Walled Lake teachers who have been critical of Trump without repercussions. His termination letter cited "a lack of professional judgment."

The superintendent reached out to Kucera, and on July 22 they met. The personnel file obtained by the Detroit News says the superintendent was looking for ways "we may be able to save this relatively new teacher's career" and administer something less than termination. The file also notes that Kucera had a previous instance of "poor judgment." That incident apparently involved Kucera not showing up for class and not telling anyone back in October of 2019. The superintendent offered Kucera a path back to the classroom, but the next day, Kucera said no thanks, saying that the issue would follow him into the classroom. The file also included this piece of info from the superintendent:

When I asked him whether or not he knew that it was the Liberals Suck tweet and not the Trump is President tweet that was the issue, he admitted that he did.

Now, it's important to acknowledge that there may be more to the story. When people call out school districts in public, there are all sorts of confidentiality rules that keep districts from fully responding; it is entirely possible that there are other problems behind this firing.

But on the surface, this tale has been enough to throw conservatives across the country and GOP-ers in Michigan into a state of high dudgeon. Michigan GOP leader Laura Cox called it "incredibly disturbing" if true. There are even fundraising efforts (though not very successful ones). They've reacted to the surface version of this story, and that's where the lesson lies.

Because the Michigan GOP totally asked for this.

A decade ago, they were busily hacking away at public education through ever manner of attack they could devise. That included a package of laws that then-governor and never-a-friend-of-education Rick Snyder that cut teacher tenure off at the knees. For instance, the old job security laws (what we call "tenure" really isn't, but it's the term everyone's used to) required that a district had to show "reasonable and just cause" to fire a teacher with tenure; the new law just requires proof that the firing was not "arbitrary and capricious."

The new batch of laws also made tenure harder to get, and that's where Kucera's troubles seem to lie. A teacher is "on probation" for the first five years of their career, meaning they can be fired for pretty much any reason at all, including Pissing Off The Wrong People or Looking Like A Potential Source of Headaches for Administration.

When tenure battles were all the rage, teachers and their supporters said repeatedly that teachers need job protections so that they don't have to constantly looking over their shoulders and worrying about a hundred little things like political affiliation. "You big wimps are just afraid of accountability," was the reply.

Well, here we are. In too many states, teachers are vulnerable to firing just for artlessly expressing a political opinion--even if they happen to be opinions by the folks who argued that teachers wouldn't be fired just for expressing political opinions. And while conservative outlets large and small whinged about the unfairness of Kucera's firing, somehow not one that I read managed to connect the dots between this unjust firing and the gutting of laws to protect the due process of teachers and the kneecapping of their unions. I'm sorry for what happened to Justin Kucera--here's hoping that he realizes that it was not sucky liberals who are responsible.