This is personal. You may want to move on. But I need to write this out because one of the people I would ordinarily talk it out with is not here.

Merrill and I taught together for just under thirty years. We were the same age, but she had gotten a late start on her career, having first worked in the world of newspaper advertising, just one of the many parts of her biography that hinted at the toughness that backed up her magnolia-sweet proper belle exterior. 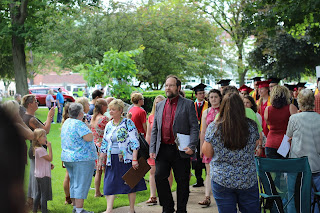 A love story (that is not mine to tell, but which has inspired me at many points in my own life) brought her here, far from South Carolina, with a young daughter from an earlier marriage. We were looking for someone to fill a new gap. Merrill came with impeccable credentials, an impressive background of knowledge, and a recommendation from a local giant in teaching English.

Over the years, we settled into regular spots-- I taught the juniors, and she taught the seniors, and so we often worked as a team. In a district that didn't always provide a lot of curricular direction, we had to make sure we were hitting the right bases with our students.

And she knew all of the bases. Her knowledge and love of literature was huge, and it just kept getting huger over the years she taught. The great headline-making showpiece of her classroom was the annual end-of-year unit for the 12th grade honors (later AP, after Merrill made the extra effort to get the official upgrade for the course) for which she first taught Paradise Lost, and then had the class split into two groups to put John Milton on trial for either whether or not he successfully made the ways of God clear to man. The trial was a huge piece of theater, with students portraying Adam, Eve, and various other characters; the jury was composed of lawyers and judges from the community. It was the project that people talked about year after year.

But there was so much more going on in her classroom. She taught those seniors--the ones who know they're supposed to go to college for some reason, but they aren't sure why to what they want to do when they get there-- she taught them to think like college students, to develop the disciplines of reading and writing and interpreting. She taught those seniors who were headed straight into the "real world" how to communicate effectively, to deal with nuts and bolts like resumes, to be responsible, that there were plenty of aspects of literature that were fully accessible to them even if they weren't "college bound."

And like all the great teachers, she cared, enormously. Students knew they could talk to her about anything, at any time of the day. She was a mother hen in the best sense of the word, and her students--even the ones with whom she butted heads--knew she cared about them, not as projects or work-related responsibilities, but as human beings. Every Friday, she told her seniors to keep it "safe and legal" over the weekend.

She took the work seriously. She was up well before the crack of dawn, in her classroom hours before students arrived, and she took truckloads of papers home every evening. She was department chair for forever because nobody else wanted to try to match her level of organization. And nobody in the entire district was better at shaking down publisher's reps, who waltzed in, heard the sweet southern accent, and figured they had another easy mark.

Merrill was fiercely loyal, and she never half-assed a commitment. Once she had committed to an activity, a committee, an organization, she stuck it out, even in the face of disappointment or just plain being taken advantage of.

We were a team for many parts of school life. I advised the yearbook; she was the business manager. I directed the school's variety show; she worked the box office. We had very different styles in the classroom, and over the years we had the occasional disagreement. But those disputes never lasted. Every year her students held a debate about Lady Macbeth; Merrill always sent one team to me because I believe Lady M is redeemable, and Merrill did not. She helped me land my first writing gig. She was my work sister.

I admired her depth and breadth of knowledge, her ability to be a positive force for so much of the staff, her love for her students. She battled illness. She knew how to balance being a good team player with maintaining her high standards, a skill I never exactly mastered. I also admired her courage; Merrill really didn't like situations where she had little control over what was happening, and yet time after time, she waded into exactly those situations, from moving to a strange small town to all the control one gives up to be an effective classroom teacher. I have little doubt that part of her longed for the safe, simple thing. She had the background to retreat into the role of the cutesy blond former cheerleader belle, baking tarts and sitting quietly on some civic committee. But she didn't, because she was so much more than that. She pushed herself, often in roles that were never going to provide much glory or recognition. She suffered through years on the bizarrely contentious humane society board, and everyone who ever got married in the Episcopal church owed Merrill for the smoothly-running ceremony. She ran a writing competition held in honor of the woman who first pushed Merrill toward our district. She never wasted a moment.

When I retired, she stuck around. She didn't have as many years in, and I don't think she wanted the department to lose both of us in one year. But last spring, she decided to take the retirement plunge. Then everything went to hell, and she didn't get a victory lap, a goodbye session with her last students, or a send-off from the staff that loved her. There was a retirement party scheduled for this month, but as you have by now sensed, it won't be happening.

Friday night, Merrill experienced what they call a major cardiac event in the middle of the night, and she passed away.

It hardly seems real. She was too young; this is much too soon.

As humans, we learn this same lesson over and over and over again. Do not waste time, for so many reasons, not the least of which is that we have no idea how much we have, or how much the people around us have. And I think as teachers we have a greater requirement to remember it, because it is easy to start imagining that the present--the time of classrooms and studies and youth and childhood--are some sort of swift empty present to be run past on the way to some "real life" that starts on some unknown future day. But real life is going on right now, right this instant, and it is not a rehearsal or a trial run or an empty placeholder. Yes, we can say that youth has the advantage that some choices can be unmade or remade, but it is still real life. And it is still not to be wasted.

If you want it in fancier words, this quote from Nick Cave crossed my desk just this morning:

This feeling… of alertness to the inner-spirit of things — this humming — comes from a hard-earned understanding of the impermanence of things and, indeed, our own impermanence. This lesson ultimately animates and illuminates our lives. We become witnesses to the thrilling emergency of the present — a series of exquisite and burning moments, each extinguished as the next arises. These magical moments are the bright jewels of loss to which we cling.

After retirement, you become sort of a ghost at your old school, but the magic of texting and social media blunts much of that effect. Most recently, Merrill had asked me about writing "the letter," and at the beginning of the summer, I sent her a letter on the occasion of her retirement, and she responded via text. Thank to technology, I can keep those conversations for years. They can serve as reminders; they will not substitute for all the retiree lunches we were going to enjoy once the pandemic subsided. We were going to make a swell pair of old retired friends. I have the picture above as well. Merrill and I for years and years led the seniors into the graduation ceremony, and when I retired, I made sure that taking that walk would be my last professional act. So that picture is of our last walk together.

These are scary, difficult times, not just because of the pandemic, but because of how some people choose to handle it-- less kind, more selfish, or just withdrawing and waiting for it all to end. We could do better. We could not waste the time we have, even if it seems like a meager, cramped time. We can be brave enough to step on into the times, to embrace and support the people around us, even in the face of heartbreak and fear. We can be smart enough and committed enough to focus on the big stuff and not the little piddly crap. Merrill was passionate and strong about what mattered, but she was never unkind or thoughtless. She was always goodhearted and classy.

These are not lessons from Merrill's death; there are no lessons to be learned there, other than sometimes people you love die and it really sucks. But since there will be no chance to learn new lessons from her, I can put a pin in the lessons from her life. I don't know what to do with all the conversations I'm going to want to have with her in the years ahead. I miss her. Remember-- don't waste time. Take care of the people around you, and for heaven's sake, be kind, babies.
Posted by Peter Greene at Monday, August 03, 2020