Well, this is an interesting piece of research.

A new paper in the Journal of Experimental Psychology suggests that overconfidence can be transmitted socially, that being around overconfident people rubs off on other folks.

As with most psycho-social research, the experimental designs leave room for considerable debate, and there are plenty of needles to thread. I find it interesting that the transmission only appears to occur within people in your own tribe. 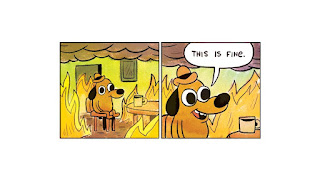 The research reminds me of a not-uncommon phenomenon in the world of student performance-- the group founded and led by somebody who's not very qualified, but who is absolutely confident in their awesomeness, and the group itself is filled with students who are vocal in their belief that Beloved Leader is awesome and the group itself is also awesome. These kinds of groups are aided and abetted by an entire industry of "competitions" that let them earn medals and awards.

The power of overconfidence is under-discussed in education, probably because the problems of confidence gaps loom so much larger in classrooms. But the effects are similar. A student who lacks confidence will not try, because not trying is the only tactic they believe they have for avoiding failure. The overconfident students will also not try--because they don't think they need to.

Both are also brittle and destructive. Someone lacking confidence collapses at the first sign of impending failure. Overconfidence lacks any tools to deal with failure, and has to retreat to blaming ("They must have cheated!!") or trying to overwrite reality ("No, that's actually what was supposed to happen").

Could this kind of viral overconfidence be used as a factor in group work? I don't think I've ever seen that phenomenon in action. But confidence is a huge factor in the entire student social scene, as powerful in its own way as tribal behavior. This is the kind of thing I read about and it makes we want to get back in the classroom and try tweaking some things. Could I nudge some growth by putting over and under confident students together? Probably not, because levels of confidence are used by teens to sort and recognize fellow tribe members.

But there is another kind of confidence, which is confidence in one's own ability to cope with the outcome no matter what that outcome may be.

This is one of the things I learned years ago in divorce school. I fully expected to never recover, to never be able to uncurl and stand up and get back to doing stuff. But as it turned out, I was considerably more resilient than I thought, and I carried that (at least on my good days) forward. I re-acquainted myself withe the power of the question "What's the worst thing that could happen?" and learn to add "And if that happens, is there any reason to think I can't handle it?"

In the classroom, we can be reluctant to just say to a student, "No, that's wrong." But I think the key is to send a message of "No, that's wrong, but you will still be fine." It's the same message that more recently has morphed into the reminder to students and parents that students are more than a test score. Your failures may be real, but they don't have to define you as a human being. I think that's far more useful than trying to convince yourself that they aren't failures at all.

It's all a critical part of learning how to be your best self, to be fully human in the world--you have to strive to see reality as clearly as you can, including your own strengths and weaknesses, without letting them define your ability.

It is the opposite of standardization, which feeds the kind of viral overconfidence the paper talks about. In this approach, you set an artificial bar (especially one that your tribe is well-poised to clear) and then you treat that artificial bar as if it is proof that you are wise, smart, and destined to be successful in life. And then whenever anything doesn't go your way, you blame that failure on someone or something else. Or you just tell yourself that everything is fine. Just fine.
Posted by Peter Greene at Tuesday, August 04, 2020
Email ThisBlogThis!Share to TwitterShare to FacebookShare to Pinterest