Protect Our Public Schools is a group of retired teachers and other stakeholders working out of Livonia, Michigan. While their reach may not be large nor their pockets deep, they have come up with a fun way to demand Betsy DeVos's attention. 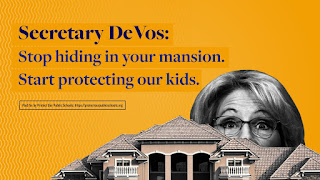 While demanding that public schools be open and full this fall, DeVos herself has been working remotely from one of the family mansions. POPS has been calling attention to that, at least in Michigan, by hiring a mobile billboard. It's technically a truck with three giant LED screens, and they're taking it on a tour of Michigan, with special stops in Detroit for US Senators as well as the Trump campaign.

The messages on the screens are pretty direct:

No plan. No funding. No experience.

The truck (well, another truck with the same messages and sponsored by POPS) also made a tour of Washington, DC where it sat outside the Department of Education for a while. The cost was reportedly around $15,500. The group has a publicist

Michigan news outlets were unable to get a response from the secretary, but when Newsweek asked, USED press secretary Angela Morabito shared a few thoughts:

This is not news; it's a cheap ploy to get attention, and Newsweek is taking the bait. Instead of reporting what's on a billboard, look at the facts.

POPS vice-president and former teacher Ellen Offen has been handling the press, with criticism centering on the DeVosian lack of leadership and the mandate to open schools without any help in developing a plan to do so safely (and while simultaneously demanding that students should be able to get their education anywhere).

The billboard is currently continuing its tour of Michigan, culminating, they hope, with some time spent circling a DeVos private home. It will be in Grand Rapids on Thursday and Holland on Friday. Here's a look at the truck in action, courtesy of Detroit's WDIV channel 4.


You can find POPS on Facebook. Meanwhile, just so you know, mobile billboards like this are available for rent in cities all acros the country. Just saying, that if you're looking for a fun project... For further inspiration, here are some pictures from the truck's visits so far. 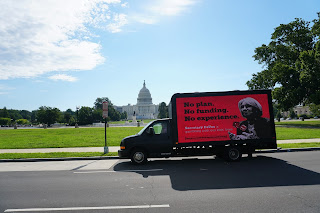 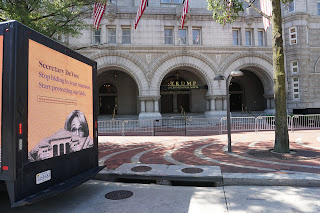 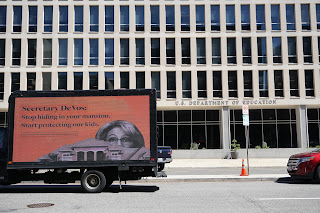