Joe Biden and Bernie Sanders have announced a half-dozen unity task force thingies, one of which will be focused on education, more or less. Folks are reacting with varying degrees of freaking out on the social medias. I'm going to recommend that you take a deep breath. Here are some things to consider.

Alejandro Adler is nobody to be excited about. He's an academic who is associated wit silly argle-bargle like this:

...to infuse education systems in these countries with skills-based teacher training, curriculum development, technology use, and, financing; to measure the impact of these interventions on youth well-being and long-term life outcomes; and to ultimately empirically inform and systematically transform education systems to advance social development 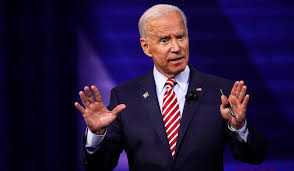 So, focused on measuring things that can't be measured and using education as a tool for social engineering. The language of pay for success. And skills. Great. Like that hasn't been a royal pain in education's butt over the past decades. Adler is the least exciting part of this group.

Maggie Thompson is an Obama alum with a background advocacy, none of it particularly associated with education. Christina Vilsack, on the other hand, taught middle school for almost twenty years, and now does a lot of literacy advocacy when weighing her own political options. Hirokazu Yoshikawa is another academic, specializing in education and globalism, with an extra focus on pre-school; he's te co-author on a book entitled Cradle to Kindergarten. And, of course, Lily Eskelsen Garcia and Randi Weingarten are also on the team.

It's not a reassuring line-up.

On The Plus Side

The team is headed up by Representative Marcia Fudge (D-OH) and Heather Gautney, Ph.D. Fudge is a member of the Progressive Caucus and Gautney is the Fordham University professor who served as a Sanders campaign senior policy adviser.

The education concern about Biden has always been that he would just be Obama 2.0 (aka Bush 3.0). So the fact that they let a couple of left-wingers into the party is almost srt of encouraging if for no other reason than it signals that the campaign is aware that it has a problem with its progressive (aka "what used to be called actual Democrats") appeal.

It would be nice to see the campaign steal more ambitiously from just about any other campaign (except Mike Bloomberg) but on the K-12 education policy page (which you find by scrolling waaaayyyyyyy down his page of policy stuff), it's just the same old weak sauce.

Why I'm Not Very Excited Either Way

First, this is political stuntsmanship. The key word is "unity," as in "honest, it's okay to vote for Biden even if you still haven't taken down your Warren or Sanders posters, because we really truly are one big happy family." In other words, this team is not about coming up with good education policy as much as it's about improving electability chances. They didn't call together a bunch of educators; they lined up a bunch of political operators.

Second, I don't know about you, but there is almost nothing that Biden could say or do that would make me trust him on education. Not even "Sorry, we really screwed the pooch back when I was VP" because at this point, it's way too late for me to believe any apology. He's denounced Betsy DeVos; he hasn't shown that he understands the Obama administration's responsibility for helping create her. We were always going to have to watch his every education move and be prepared to raise a stink if his administration did something awful. Nothing that he does between now and November is going to change that. (And--though I hate to say it-- he has to get elected first, and I'm not prepared to make any bets on this race.)

Third, the whole platform thing. I will never understand the deep and intense fights of party platforms. I can't recall a singe moment in history when a candidate has said, "I don't really like this idea, but the party put it in the platform, so I will now try to make it happen." Platforms are like mission statements-- good for collecting dust, but in the meantime, people are going to do what they're going to do. Maybe this team is actually going to do something that will have an effect on the policies that Biden (if elected) will pursue, but I'm not betting my lunch money on it.

Nothing has changed. Supporters of public education were always going to have to be vigilant and, when necessary, noisy for the next four years. That hasn't changed, especially not since the Democratic Party washed out everyone except a candidate who remains next-to-bottom tier when it comes to education. Nothing the campaign could do now would convince me to relax my concerns or vigilance, and that should be true for all public education supporters.
Posted by Peter Greene at Wednesday, May 13, 2020