This ran over at Forbes back in early December, and in the Christmas rush I just forgot to port it over here to the mother ship for those of you who don't read me at Forbes. So it's not fresh, shiny news-- but it still matters.


Billionaire Eli Broad has long worked to impose business solutions on U.S. education, believing that education has a management problem, not an education problem. As one Broad fan is quoted in the Washingtoin Post, “You think a superintendent is like the lead principal or lead teacher for a school district, but you have to think more like a CEO of a major corporation." It’s not unlike the belief that a private sector CEO doesn’t need to know about the industry in which he’s working—he just needs to be a good CEO. 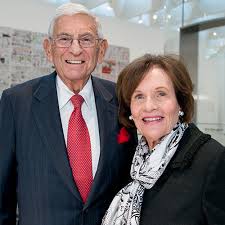 Broad is a bit of a scrapper who has described himself as a “sore winner.” He has backed his version of education reform in many ways, from pushing a plan to put half of Los Angeles students in charters schools, to making big money pushes for his favored LAUSD board candidates. His foundation disperses money to many of the big ed reform groups, and in 2014 he approached former Arne Duncan aide Peter Cunningham about creating a sort of war room rapid response press outfit to get the reformer point of view out there (Education Post was the result). The Broad Foundation has been one of the “Big Three” funders of education reform, just behind the Bill and Melinda Gates Foundation and the Walton Family Foundation. The foundation aims to “advance entrepreneurship” for education, favoring business models over traditional democratic ones; they literally wrote a handbook for closing down and replacing public schools.
Perhaps most central to Broad’s vision for remaking U.S. education is the Broad Academy. Created in 2002, and part of the Broad Center for the Management of School Systems, the Academy was an unaccredited training program for CEO-flavored school system leaders. Much like Teach for America, which Broad has also supported and which has produced many Academy “graduates,” it’s a training program that has existed deliberately outside of the traditional programs that prepare educators and education leaders. Unlike a traditional graduate school program, the Academy has had no faculty and meets for just for a few weeks (now five, originally fewer) per year.
The goal has been to create a pipeline for Broad-minded school leaders to move into and transform school systems from the inside, to more closely fit Broad’s vision of how a school system should work. Through a residency program, Broad often sweetens the pot by paying the salary of these managers, making them a free gift to the district. A 2012 memo indicated a desire to create a group of influential leaders who could “accelerate the pace of reform.”
How have Broad graduates fared in the real world of education? Many of the most familiar names are familiar precisely because of their level of failure. Robert Bobb had a lackluster showing in Detroit. Jean-Claude Brizard received a 95% no-confidence vote from Rochester teachers, then went on to a disastrous term of office in Chicago. Oakland, CA, has seen a string of Broad superintendents, all with a short and unhappy tenure. Christopher Cerf created a steady drumbeat of controversy in New Jersey. Chris Barbic was put in charge of Tennessee’s Achievement School District, and resigned with all of his goals unfulfilled (and recommended another Broad grad as his replacement). John Deasy’s time at LA schools ended with a hugely expensive technology failure. Broad has at times shown tight control over his folks; in one infamous case, John Covington left his superintendent position in Kansas abruptly, leaving stunned school leaders. Not until five years later did they learn the truth; Eli Broad had called from Spain and told Covington to take a new job in Detroit.
Broad, now in his mid-eighties, is not getting any younger. The Center was finally accredited in 2015. In 2017 he announced his retirement from his foundation. And this week, the news that the Eli and Edythe Broad Foundation was giving $100 million to the Yale School of Management to establish the Broad Center there, moving his program from LA to ivy halls; it’s one more sign of his philosophy that the Academy’s new home is a school of management and not in a department focused on education.
There’s little to point to in the last twenty years that would suggest that a slightly trained educational amateur who “thinks like a CEO” is a good bet for running a school system well. Broadies have certainly found their way to positions of power and established lucrative careers for themselves, but there is little evidence that they have benefited students. Whether Broad is hoping to buy a veneer of legitimacy for his program or is trying to secure a legacy through the program, the case for treating school districts like businesses still hasn’t been made, and it says something about that argument that the Broad Center has focused on “urban” schools and not the school systems of wealthy communities. Yale is a well-regarded school, and $100 million is a lot of money, but that does not mean that the Broad Center is a good idea.
Posted by Peter Greene at Wednesday, February 05, 2020