Pennsylvania's Legislative Budget and Finance Committee has released a report looking at "Public [sic] Charter Schools Fiscal Impact on School Districts." The findings of the joint committee underscore what many have already been saying-- charter schools, particularly in a badly regulated state like Pennsylvania, are hurting public schools. 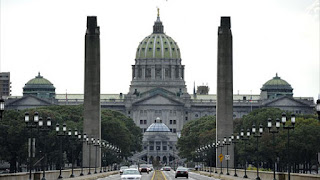 The report is 105 pages long, so I'm going to be focusing on just some of the highlights here.

How PA Stacks up Against US

The committee looked to compare PA to its chartery brethren and sistern, so it looked across all forty-three states that allow charter schools. In particular, they noted some differences in charter laws.

* Twenty-two states (including PA) have no caps on schools on enrollment.

* Thirteen states include "access" to local funding in charter revenue. PA is up in front of the pack on this, which makes a certain kind of sense since PA also leads the pack in requiring local revenue to fund public schools.

* PA is one of two states that has a special ed supplemental formula. That means every charter gets some funding based on nothing more than the assumption that around 16% of its student body is special needs. According to PDE data, in the 20145-2015 school year, the state gave $466.8 million in special ed tuition payments to charter schools, and roughly $294.8 million of that was special ed supplement. Actual charter expenditures on special ed-- $193.1 million. In other words, in PA and Massachusetts, it's extra-profitable for a charter NOT to take students with special needs, because they will get paid to educate those students even if those students are not enrolled at the school.

* PA is one of the the only three states that let charters appeal to the courts when they don't like the answer they get from other folks (we just saw an example of this).

* "Virtually all" of PA's pubic school districts have at least one student enrolled in a charter. However, Philadelphia accounts for about half the charter students in the state.

This chart puts the PA charter industry in the context of other states in the region. I do wonder what exactly it means that Ohio has over twice as many charter schools that handle fewer total students than PA, but that's a question for another day.

The joint committee's staff reached out to several districts, including the "financially distressed" and charter-heavy in PA. Thirty-six superintendents responded with observations about the economic impact of charters.

Four had nice things to say, like "innovative programming," "customer-friendly," "prevents overcrowding," and "replaces the high school we can no longer afford to run."

* When charters pull students from private schools, that shifts additional costs onto the public sector.

* Consolidating buildings in a district often leads to charter exodus, which pressures districts not to consolidate even when it is costly to keep all buildings open.

You see the pattern here. Having charter schools in your district makes education more expensive.

Policies That Add To Issues

The joint committee found that certain policy decisions by the state had an impact on how much charters could hurt local districts. Which-- well, yes. I look forward to the commission to study where the sun will come up tomorrow. Pennsylvania has several policies that make charters more damaging.

For instance, the state used to reimburse local school districts for part or all of the charter tuition that they handed over. In 2010-2011, that was $225 million. Currently, the figure is $0.00, a de facto funding cut to public schools.

PA has also opened up the field to "regional" charters. Originally, a charter had to have the approval of the district from which it would poach students. Now students can travel across district lines, meaning that the public district hands money over to a school over which the public district has no oversight at all.

And as many education observers in PA note repeatedly, our charter tuition formula is not related at all to the actual costs of running the charter. This is particularly striking with cyber schools, which have no bricks-and-mortar expenses, and yet receive the same tuition money as a bricks-and-mortar school.

Why Do Parents Choose Charters

The joint committee looked at both national and state-level studies and found many curious things. There's the Indiana study where parents say they go looking for academics, but actually switched their children to lower-performing schools. Of the New Orleans study where parents said they go looking for academics, but actually choose based on location. And although the committee doesn't connect these dots, some studies show parents choosing charters for smaller class size, less emphasis on testing, and more specialized programs-- in short, they want a school like the public schools we had before the test-centered reformy juggernaut hit.

Let financial impact count. Current law doesn't allow a district to consider financial impact when approving (or not) a charter application. This is crazy-pants, like saying you are only allowed to choose not to eat something based on appearance, and not on whether it's poisonous or not. Districts should be able to say, "No, we can't afford this." Also, applying charters should provide a detailed financial plan, including "the proposed actions the charter school will take to protect the school districts (and the Commonwealth) from financial liability in case of charter school bankruptcy or other illegal acts."

Permit the public school district to negotiate per-pupil costs. Instead of letting the state set a required tuition rate, let the local district work it out with the charters. At a bare minimum, the committee suggests revisiting the flat rates for cyberstudents and students with special needs.

If you are going to pull your child out of private school to send her to a charter, you should register with the district that will be paying the tuition. This and a provision for changing how PDE "intercepts" funds is more bureaucratic streamlining than cost saving. The report also recommends that local districts be relieved of their duties as attendance watchdogs for charters, and that charters operate with considerably more financial transparency.

The report is perhaps a bit narrow in scope and context, given that Pennsylvania has 500 separate public school districts. But while the report focuses on PA, its attempt to give a national context to charter policy means it gives an interestingly broad picture of the charter industry across the nation. For that reason alone, you might find this interesting reading.

But for those of us in PA, anything that can put a little more weight behind any real attempt to fix our terrible charter laws would be great. Our legislators keep trying to come up with bills that can be sold to parents, taxpayers, school districts, and the general population, but which keep the deep-pocketed friends of the charter industry happy and the results, like this most recent attempt, don't really fix a thing. Pennsylvania taxpayers and students deserve better.