LeBron James is one of those millionaire sports stars who actually tries to do some good. In his home town of Akron, he has set up the LeBron James Family Foundation, a group that has been hugely active in the community.

In 2011, recognizing that real change would require a lifelong commitment rooted in research and executed with care, LeBron began to tackle the high school dropout rate in Akron and launched the I PROMISE Initiative. It’s more than a program, it’s a long-term commitment to the youth in this community. 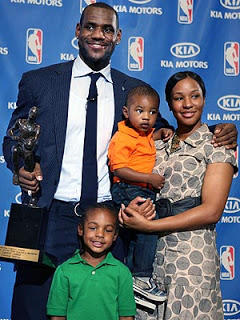 The foundation has done a great deal of good work, including an initiative to help the children and the families of the children who are behind by third grade, which is an admirable initiative and certainly far more useful than, say, passing a law that those children must stay in third grade until they can pass a standardized test.

Now James is going to take a next step-- starting an I PROMISE school. And he's going to do it in conjunction with the Akron Public School system, the same system that he and his foundation have been working with all along.

That's right-- not a charter school.

This leaves Jamie Davies O'Leary... bemused. O'Leary is the Senior Ohio Policy Analyst for the Fordham Institute (which operates some charter schools in Ohio). O'Leary has also worked for the Ohio Council of Community Schools, one of the longest running charter school authorizers in Ohio, mostly as a communications (PR) person.

O'Leary lays down the James education history, and then starts into the bemused part.  Most folks at first assumed James was starting a charter, she reports. We'll have to take her word for it, but her reasoning, though incomplete, is impeccable:

That’s an understandable mistake, as celebrities and stars of all stripes have gotten in chartering in recent years, from Andre Agassi to P. Diddy to Pitbull and beyond. And why not, given that in most places, the charter model comes with huge advantages for philanthropists wanting to make a difference, among them the freedom from district red tape and teacher union contracts.

She doesn't mention that charters also have the huge advantage of bringing solid ROI and sheltering taxes, an excellent reason for edu-amateurs to invest some of their money in charters.

James' school plan sure sounds chartery to her. But "while the school won’t have the autonomy that most charter schools have, it also won’t be forced to navigate Ohio’s increasingly challenged charter landscape."

What makes the landscape so challenging? In Ohio, the wild west of charter schools? O'Leary says its the "double whammy of recovering from a long-held poor reputation and inhospitable policies for education entrepreneurs." Well, I'm not sure the poor reputation is exactly recovering, but then, why do Ohio charters have a poor reputation? Could it be they've done a craptastic job of educating students and being stewards of the taxpayers' money? And might that also be an explanation for why the state is actually toying with actual accountability and oversight? Challenging landscape, my left buttock. Ohio charters made an untidy soiled bed, and now they are sad about having to lie in it.

But O'Leary also wants to complain that charters get less funding; perhaps she's forgotten how we were all sold the idea that charters would be good for taxpayers because they would do more with less. Or the popular argument that "throwing more money" at schools is no help, anyway.

There's more about how tough charters have it, to which everyone working in public education in schools that have been denigrated and defunded by folks trying to drive traffic to charters-- well, we will just offer you some cheese to go with that whine.

But then O'Leary wraps up with an impressively disingenuous final paragraph:

Best wishes to LeBron in his endeavor, and to his overall partnership in Akron where historical performance data show there is tremendous need. I’m agnostic to school type: if innovation can spring up within traditional public school districts and deliver results for at-risk kids, then more power to them. At the same time, we must remain vigilant against over-regulation and wary of any climate wherein starting up a new charter school is about as likely as making a half-court buzzer beater.

Good luck teaming up with Akron Schools, because we hear they really suck. And although I've worked in the charter business my entire career, I have no preference between charter and public schools. If public schools can be innovative and awesome (like we are in charters) then more power to them ("more power to them" joins "well, bless your heart" in the catalog of Ways Polite People Tell You To Go Jump in a Poisonous Lake). Also, "them" makes it clear that, despite my alleged agnosticism, I consider public schools "them" as opposed to "us." Meanwhile, on a completely other topic, let me just repeat that charter regulations are bad and we don't want them.

It's not that confusing. James decided to work within a system already in place, with educational experts who already work in the field, by setting up programs and a school that are designed to help children without any regard for enriching his own bank account. It's totally do-able-- and he did it by throwing money at the public system. I suppose if you thought the idea of improving education was to do it in a way that private individuals profited and took control of the system, then this would be a bit confusing. But if you thought the priority is supposed to be helping students, their families, and their communities-- well, then LeBron James' decisions make a great deal of sense.

Imagine if we took a similar approach in other public school districts, an approach of enriching and building up what we already have instead of creating other unconnected parallel private systems. Imagine that. Why, I bet we could even do it without waiting for a sports star to help out.