Even as many charter fans are backing away from the idea of for-profit schools, last month found US News running this piece arguing that profit-making and education go together like a horse and carriage.

The author is Ian Lindquist, a 2009 graduate of St. John's College (the read great books people), former charter school teacher, and current fellow at AEI. Lindquist wants us to know that the profit motive is completely compatible with sectors that provide public goods. In fact, in response to the criticism that "this profit motive renders for-profit schools incompatible with public education," Lindquist has a simple response:

Lindquist's argument would have been better off if he had quit there. But he didn't. Here's the rest of the nonsense paragraph.

Education is not the only sector that provides public goods. Indeed, there are many public goods handled by private companies: hospitals, prisons and transportation systems operated by for-profit providers ensure public health, public safety and public transportation. In none of those cases does profit motive necessarily dispose the company to abdicate its mission of serving the public. In these cases, companies' ability to provide the best product possible is aligned with their ability to make money and pay their shareholders. Far from giving up their social missions to seek profit, they need to serve the public both to accomplish that mission and gain profit. Without mission, no profit. The mission is and must be primary.[emphasis mine]

Um, no. The health care industry in the US has been ranked among the worst in the developed world for a few years now, but if you don't want to have that debate, let's consider a few other points. 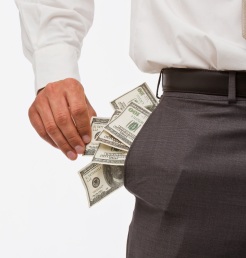 Rural hospitals are closing at an alarming rate across the country. This is not because of a lack of customers-- they could certainly continue their social mission if they wanted to-- but because millions of uninsured Americans "who cannot pay when they show up at their local hospital, putting a direct strain on the hospital's bottom line." Even where hospitals have not closed, but have been snatched up by giant health care conglomerates, business affects the care people get. My county used to be served by two local hospitals; it is now served by a single satellite facility bought up by health care giant UPMC, which makes it necessary to travel to Pittsburgh for procedures and care that used to be available here. Why have they been shifted? Because business concerns drive how health care is provided.

And, to digress for a moment, UPMC is a good example of how meaningless the distinction between for-profit and non-profit is in the first place. UPMC is a $12 Billion corporation that is nominally non-profit, but all that actually means is that there are no shareholders to share the multimillion dollar profits with (and that they get sweet tax breaks). They pay their CEO $6.4 million. They make decisions like a business.

Or let's talk about Aetna, making news this week by dropping out of Obamacare in all but four states. While this first looked like s straight-up business decision, because insuring poor, sick people is not a money-maker, the story has developed into something far worse. It would appear that Aetna actually decided to use those poor, sick folks as leverage for a business negotiation, telling the feds that if Aetna couldn't have its way with a merger, they would just dump all those insurance customers. No mention anywhere of their concern about their social mission. (Though their CEO did make $27.9 million last year.)

To claim that health care in this country is not driven, twisted, warped, and in some cases denied to people because of profit-driven concerns is nonsense.

Or let's talk about profit-driven prisons. The feds have announced their intent to phase out all uses of privately-run prisons mostly because the for-profit prisons aren't all that great at their jobs.

“They simply do not provide the same level of correctional services, programs, and resources; they do not save substantially on costs; and as noted in a recent report by the Department’s Office of Inspector General, they do not maintain the same level of safety and security,” [Deputy Attorney General Sally] Yates wrote.

I'm going to give Lindquist a pass on privatized because I don't have the time and space to launch a Uber discussion here. And he's already disproven his point twice.

Lindquist tries to offer some positive examples and lands somehow on Charter Schools USA, a group known in Florida for its artful use of real estate shenanigans to turn a profit. And he does rightly note that both sides of the debate can play Dueling Anecdotes all day. He puts his faith in authorizers and charter contracts to keep charters honest, but that approach is already failing spectacularly in places like Ohio. Sure, it's nice to believe that an authorizer would say, "Well, this charter is making good money for all of us, but it's not doing a good enough job, so we'll shut it down." But there's no reason to believe that's how it works. We already have an example in the cyber-charter sector, where virtually everyone agrees that cybers are doing a lousy job (including bricks and mortar charter fans) and yet somehow they remain untouched, unrestrained, unphased (but not unprofitable).


Look, public education is fundamentally different from a business. If I'm selling widgets, I can increase my revenue by a judicious use of my money. I can upgrade my widgets and charge more for them. I can bring in more customers. I can get more money to flow in.

But in public education, the situation is pretty simple. The government gives me a stack of money, and the only way I can increase revenue is by increasing taxes. Not an easy sell. So I take that stack of money, and every dollar in that stack is either put in my pocket or spent on students. It is the very definition of a zero-sum game. Money I stick in my pocket cannot be spent on students. Money I stick in my pocket will not bring better teaching, better facilities, or better resources. It will just be in my pocket.

A for-profit school is a school in which the students and the operators are in fundamental opposition. Lindquist says that the need to do a good job in order to stay in business will somehow align those interests, but to stay in business and keep making a profit, I don't need to do a great job, an outstanding job, or even a very above-average job. I just have to do a good enough job. And it is in my profit-making interest to do just a good-enough job, because improving my product will not increase my revenue-- it will just put fewer dollars in my pocket.

And for-profit business decisions means there must be winners and losers. It's simple business smarts to serve only the customers who fit your model. We have services like public education and a postal service because private enterprise would dump some customers as being too unprofitable, too costly to serve with too little reward for serving them. "Public education for some" is not the motto we've been following in this country.

The profit motive and the free market has a place in providing some services for schools (I have no interest in single national textbook company), but when it comes to operating the schools themselves, the profit motive is a problem, not a solution. We've already got plenty of evidence; it's time to be done trying to pretend that for-profit charters are a benefit for anyone except the people who end up with pockets full of money.