Imagine that you are a Native American teacher, working with six year old students, and you come back to start the school year, only to discover that the district would like you to teach your students that Christopher Columbus "discovered" America, as if your own ancestors had never even existed. Or depicted them as a culturally tone-deaf cartoon. And when you tried to point out that the materials you were being directed to use were sexist, racist and just plain wrong, your concerns were brushed off and dismissed.

That's the situation that Minneapolis teacher Shana Dickson found herself in last week, as Minneapolis Schools decided to kick off their school year with a truly terrible $1.2 million choice in reading materials for its K-2 students.

The story is laid out in a compelling and invaluable series from Sarah Lahm on her blog Bright Lights Small City. The series of posts start here, and you can follow trhe links until you need to jump to this post and today's update.

I'm not going to recap all of Lahm's work-- you should go read it for yourself-- but there are details that are just kind of amazing in their foolishness.

The company providing the materials is Reading Horizons, an outfit that apparently identifies itself as Mormom with a mission, its materials intended to further its work in service of God.

The work reported on is not overtly religious, but it is certainly seriously retro in its portrayal of gender roles and various cultures. It includes a straight-from-1953 depiction of Native Americans 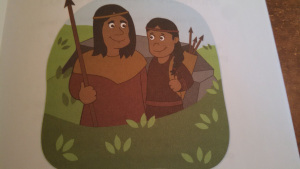 The reading materials are part of a program that boasts of being so scripted that "even a janitor" could teach it. District officials have been strikingly unresponsive to complaints, offering everything from the Little Books are a tiny part of the program to the ever-popular, "Look, everything else really sucked." Which is silly. My wife just finished a two-year stint as a first-grade teacher with a reading series complete with Little Books (decodeables, they're called) which I examined closely in the process of assembling a gazzillion of them, and while they are no great works of literature, they certainly weren't filled with the kind of foolishness that Reading Horizons is pushing.

At any rate, while I usually try to save and collect your must-read materials for Sundays, this could not wait. This is not about education reform or politics or anything except bad administration of a school district that doesn't involve its own trained teachers and consequently blows over a million dollars on materials that are transparently terrible.
Posted by Peter Greene at Tuesday, September 01, 2015