This morning I made a brief appearance at a small but very special occasion. So I want to brag on my old school.

The woman in the photo is Rachelle Surrena, an art teacher at my old high school. Earlier this school year, she had a bit of an inspiration-- create a community-based mural to become a major piece of public art in our community. 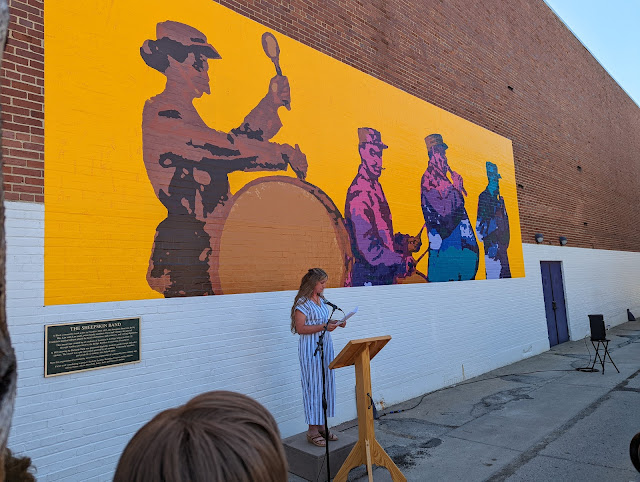 That may not be a big deal for those of you who life in big cities where public art is all over the place, but here we have only a handful of such things.

She secured grant money. She rallied her high school art students, and with them settled on an idea to do something related to local culture and history. The class invited local historians to come speak to them; that's where I came in because I have written the book, literally, on the history of local musical groups. The students visited the local historical society, studied up on several ideas, came across an image they liked, and designed the project.

I'll tell you more about the image in the mural in a bit.

There are several things to be amazed by. A mural project is about 50% artistry and 50% technical stuff. The students created the image, and then their teacher, with assistance from other teachers and resource people, figured out how to create the actual physical thing. Break the image into 48 three foot by three foot squares of a sort of poly fabric. Get the squares broken down into a sort of color by number scheme. Attach the finished squares to the wall.

The reach that Surrena put into this project is extraordinary, particularly when you consider that she married a local guy, but is not native to this small town. The local community theater, the Chamber of Commerce, city government, a charitable foundation, teachers, students all the way down to kindergartners-- and not only did she extend the reach of the project to the entire community, but she kept the students at the center of it throughout. If you could see more closely, you would find that the mural carries, subtly, the signatures of so many people who worked on it in some way. But it's the students who drove the bus--and that's so powerful.

Two students spoke today at the dedication, and I've read what some others had to say, and this has been a transformational project for them. They have learned about art, but also about teamwork and cooperation and coordinating the pieces of a large project and about their own community, That last part really resonates with me. For my years of teaching, I had students do a local history project based on primary sources, and the effect of learning community history is huge here in this little place where so many of our students come up thinking, "Well, I'm just from some dumb tiny nothing town." It's not that they learn that earth-changing things happened here, but that they see richness and roots and humanity in this place that belongs to them.

Add to that the public nature of this. The mural is on the side of our local community theater, in a well-traveled alley, across from a municipal parking lot. It will be seen . It will lend richness and beauty to what has always been a plain brick wall.

Add to that the recovered history that is there in that image. Let me tell you about the group represented here.

The late 19th/early 20th century was the heyday of town bands. In our county there were between 15-20 during that period. Only one of them was formed by Black musicians.

They were called the Sheepskin Band (a not-uncommon name in band history, referring to the material used for their drum head), and they were a small fife and drum corps. They were considered an important part of the local scene. They played concerts in the park, were hired for political rallies, appeared in regular parades. In 1910, local leaders promoted the Old Home Week with postcards adorned with pictures of local celebrities; the Sheepskin Band was on one of those postcards with the image that was adapted for this mural.

The band stopped functioning for a while because the house where the instruments were stored burned down. The local newspaper editor James Borland organized a drive to raise the money so that the band could be revived for the 1925 Old Home Week, and the newspaper promoted that fund drive relentlessly. The leader of the group was Wes Law, the bass drummer (famed, the newspaper said, for his double-drag over-the-top style), and there was concern in 1925 that Wes was getting too old and frail for the job. But Law told Borland, "I'm going to play if it kills me."

Wes Law passed away in 1932, and the band ended soon after. It's not an uncommon pattern with community groups in that period, particularly those that depend on a single person for leadership. Of the many bands in the county at the time, only one remains.

I don't want to idealize the Sheepskin Band's place in the community. They were beloved and respected, but they were also separate from the rest of the musical community, and they were largely lost to memory except for hobbyist-historians like me.

But they deserve to be remembered, and now they are a huge mural on the side of an important downtown building.

I presented a historical summary of the group this morning, having devoted my local newspaper column to that history a few months ago. The crowd gathered in the alley was a great representation of the community, including officials, teachers, families of the students, and descendants of the original Sheepskin Band members, several of whom shared with me that they had no idea that their grandparents and great-uncles had been in a big deal band back in the day. Lots of folks took pictures of the plaque with the mural; lots of folks took their pictures in front of the mural itself. 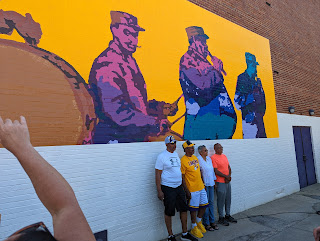 I have to emphasize this again--this was a student project, facilitated by a committed educator who dreamy big, inspired her students, and cleared a path for them to succeed. And unlike many student projects that have no life or reach outside the classroom, this both affected and was affected by the community. These students learned about their community, and they made it better. They found something, made art out of it, and put that art out in the world, and in the process strengthened the ties that hold that world together.

Posted by Peter Greene at Saturday, June 25, 2022
Email ThisBlogThis!Share to TwitterShare to FacebookShare to Pinterest