Steve Lynch is a QAnon-quoting, insurrection-joining, Patriot Party-supporting, fully-Trumpified fitnes trainer who, you may recall, made a splash while running for Northampton County executive. He made a national splash by suggesting that the solution to all these Very Naughty School Boards was to take "twenty strong men" into the school board meeting and command the board to either resign or be put out. 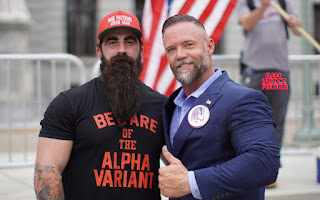 I'm going in with twenty strong men and I'm gonna give them an option--they can leave or they can be removed.

I wrote about him back in August. I am happy to report that Lynch lost his election bid. He lost it hard, by a margin of 8,000 votes in a 67,000 vote race. Though as one member of the public points out, it's discouraging that he go even 29,000 votes at all.

Lynch accepted his defeat with grace and dignity and respect for the democratic process he deeply loves. Ha! No, just kidding. He's not handling it well at all.

Lynch and his supporters have been hanging out at the courthouse with the aim of monitoring the official ballot processing. That's because Lynch is pretty sure that skullduggery. Here's a Facebook video in which Lynch complains, among other things, that election integrity is "nonexistent." He's also in favor of throwing out votes that don't "follow the rules." He's also angry at people who do no research who didn't look at candidate's records. "How many of you voted for that other guy because you heard 'ooh, that Steve Lynch--he's an insurrectionist." Which, oddly enough, is actually his record. Also, he throws around some numbers about the votes that he thinks is wrong and says, "I don't know if this is some kind of liberal Common Core math," so that's funny. His point is that the election was fixed and corrupt, and in another post, he responds to people who think he's out of line:

This is for some of you knuckleheads that say "there's no proof of what you're saying that's going on inside this canvassing..." Newsflash, your county government that is run by this corrupt Administration won't let you do those things! This should be streamed in HD video at close proximity at every table that has canvassers so that We the People can see every ballot that they're going through. But they aren't letting you do that so we're exposing everything for you as it's happening. Until you're willing to get off your lazy rear end and get down to the courthouse to look at it for yourself keep your mouth shut! You are speaking out of pure ignorance and no one's interested in your opinion because it holds absolutely no water! We the People are so done with your blatant disregard to getting to the truth! Facts over feelings!
It's a nice portrayal of small time Trumpism. We represent You People, but also, you suck because you won't come down and support us. And you're ignorant. But We the People are done with You People. Also, facts matter more than feelings, unless they are facts we don't like and feelings that are ours, in which case my feeling that the facts of the election are wrong are what matter, you stupid lazy people that I represent.
I'm not just here for the schadenfreude. Lynch is a small demonstration of the challenge of dealing with Trumpism. First, it's clearly not conservatism, though it likes to pretend to be. Second, it is about taking power. Taking power through an election is the first resort, but if that doesn't work, just keep pushing for other routes, all the way to gathering twenty strong men and just taking it by force. Don't imagine that guys with Lynch can ever be convinced by facts or reality or well-reasoned arguments.