Does it seem as if the Anti crowd-- the one demanding that schools re-open, that masks be discarded, that discussions of race be shut down, that the unions are trying to indoctrinate children, that school board members need to be intimidated--does it seem as if they are a large group, a rising wave that represents the majority?

A new Axios-Ipsos poll indicates that US adults mostly think that local schools have done a good job with this mess. 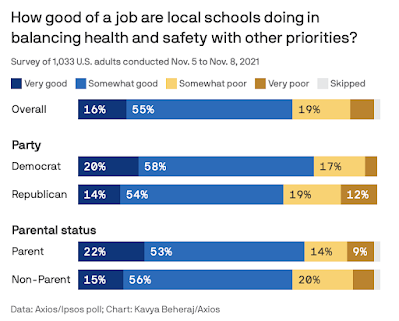 There's not really a lot of surprise here. It has always been a routine finding that people think their own schools are just fine, while it's that darn national system that's in trouble. Years and years and years of insistence has convinced people that US schools are failing, but that continued drumbeat can't quite drown out their actual experience with their own school.

Same thing here. Note that non-parents have less confidence in how schools managed the pandemic than actual parents. Even two thirds of the Republicans show some support for how schools have handled the pandemess. Though it's also worth noting that the support is mostly lukewarm.

There were other results not included in the chart that are also worth noting.

The biggest opinion break came down to age, with respondents older than 65 the most supportive (78% good) and those under 30 the least supportive (62% good).
If I were a political strategist, I would look at that wide band of lukewarm support and see folks that could be moved. I would imagine that if I made a large enough, loud enough noise, I could herd them in the direction of my choosing. I would see a block of people who could be lost by a boneheaded move by a public school--either a real one, or a carefully amplified one.
So this survey (which like all surveys must be taken with a block of salt) is both good news and a cautionary piece of information.
Posted by Peter Greene at Tuesday, November 09, 2021