New Hampshire instituted a gag order on teachers that could strip them of their licenses for teaching the wrong thing, and Moms for Liberty jumped in by putting a bounty on the heads of teachers whose broke the law. It has been a good-sized flap, as well it should have been. 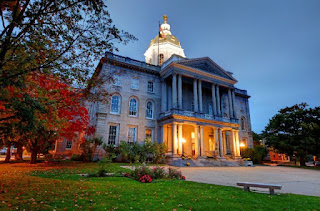 Governor Chris Sununu has come out pretty clearly on the matter.
“The Governor condemns the tweet referencing ‘bounties’ and any sort of financial incentive is wholly inappropriate and has no place,” Sununu's spokesperson, Ben Vihstadt, said in an email.
Education Commissioner Frank Edelblut, whose education credentials (if not his wealth) are on par with Betsy DeVos's, wasn't exactly condemning the M4L tweet. Asked for his two cents:
“I would encourage people to be very careful on social media," he said in an interview. “There’s a lot of rhetoric on social media that is not helpful or constructive.”
Which translates roughly to, "Dammit, Karen, don't say the quiet part out loud-- you'll queer the whole pitch."
But neither a philosophical nor realpolitik scolding convinced Rachel Goldsmith, New Hampshire's M4L chief, to back off, other than now referring to the bounty as an "incentive."
Goldsmith said if public schools had been doing the job in the first place, none of this would be necessary.

“We are parents tired of public school systems failing our children. This incentive will encourage teachers, parents, and students to find and replace bad curriculum. We just want the school boards and teachers unions to stop pushing alphabet soup (CRT/DEI/SEL) and start teaching kids to read. Manchester SD is graduating only 20 percent of kids reading at grade level,” Goldsmith said.
Goldsmith is also part of the Free State Project, once serving as executive director. The Free State Project is an initiative to bring a bunch of Libertarians to New Hampshire in hopes of essentially taking over the state and establishing a Libertarian paradise in which the government does pretty much nothing (you can learn more about them here, or in the book A Libertarian Walks Into A Bear). So perhaps Goldsmith's outrage over teachers doing indoctrinatin' is related to her feelings that public schools shouldn't really exist at all.
At any rate, it's safe to say that M4L NH will not be backing off any time soon, no matter how inappropriate the governor thinks this is.
Posted by Peter Greene at Thursday, November 18, 2021