My Battle With Learning Loss

It first hit me in the July after high school graduation--I had lost my learning about Algebra III. A whole semester, mostly gone.

Of course, I told myself, I never really actually "learned" any of that stuff in the first place. So maybe I didn't actually lose that learning.

But in college, there were other warning signs. I was an English major, so I didn't take science courses, and all of my high school science stuff started to dribble away, leaking slowly out of the brain-tank where learning is stored. And I had actually understood some of that stuff; but soon, there was nothing left but some mental images of Julius Sumner Miller flinging a bucket around, and I'm pretty sure those are stored in the giggles tank, not the learning one. 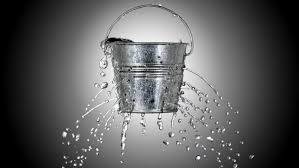 It may be because so little of college is spent in an actual classroom as compared to K-12, but learning loss was accelerating. And not just in classes like German, where I was not adding any new learning because I was not actually paying attention. And then I graduated.

Well, you know how it is. If you aren't sitting in a classroom located in a school building, you just lose learning, right and left. Plop. Out of your head.

In the canned fruit aisle at the grocery store. Plop! There goes a whole semester of Spanish. Taking communion at the rail of the First United Methodist Church. Plop! No more tenth grade English vocabulary. Just out for a nice walk on a sunny day. Plop! The entire plot of Hamlet, gone. The instant you step outside of school, you just start losing learning left and right.

I've heard the "experts," talking about how learning involves relationships and lattices and frameworks and bunching interacting with experts and this whole big complex batch of brain science stuff. I've heard professional educators explain why mediocre multiple choice tests are a lousy way of measuring how much learning is in a person's brain. I've read stuff by people arguing that you can't measure learning by the day or the inch or the pound (it might have been me, but, you know--plop). But at this point in my life, I understand that they were all wrong and the test manufacturers and politicians and newspaper editors were right-learning is just slapping a bunch of sticky notes onto the big board in your brain, and if you're not in school to have someone repeatedly bearing down on those stickies with a meaty thumb, they'll just let go and float away.

So now, in my sixties, I'm like that guy Charlie in Flowers for Something-or-other (Plop!) who just keeps getting dumber and dumber because learning loss is an unavoidable natural process that clearly happens to everyone when they are not in school. At this point I'm just hoping to hold onto basic speech functions and my ability to dress myself, but who knows. I used to know how to diagram sentences, but yesterday I bent over to tie my shoes and --plop! Gone.

I can't imagine how bad things are getting during this pandemic with students not in school to get sticky notes pushed back onto their brain boards, all those little pads of knowledge and skill just slipping down and away. Or maybe it's like their brains are buckets with holes in them and if schools aren't constantly pouring stuff into the bucket, it's just emptying out. Or maybe it's like learning can only be measured by a series of dumb tasks and if students aren't constantly drilling the dumb task, the dumb task part of their brains shrivels. I don't know. I suppose somebody could argue that that whole model of education shows a deep lack of understanding of what learning is and how it works, but it won't be me, because while I might once have understood all that rigmarole, now, well--plop.

Posted by Peter Greene at Saturday, February 13, 2021
Email ThisBlogThis!Share to TwitterShare to FacebookShare to Pinterest