Children who are houseless (homeless), have the chance to win laptops to help with their distance learning during the pandemic. They need your online votes to help them win. #HawaiiNews https://t.co/yg3maBntZ8

Reactions were peak tl;dr, with most people not making it past the tweet. But click past to the story, and then on to the contest itself, and you quickly see there' a lot to this. 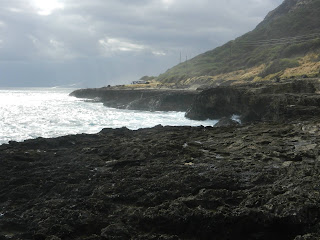 I'm no expert on Hawaii. My ex-wife lived there for a few years and my sister-in-law and her husband lived on O'ahu for a while. My wife and I visited for about a week. We stayed in a condo near the beach up near the zoo, and is our habit, we took our rental car on some road trips to see the rest of the place. Which on O'ahu, once you get out of city traffic, doesn't take all that long. It's a place of great contrast. Travel up the west side of the island, and you soon arrive at the tip that looks like the end of the world; exposed to the brunt of the ocean, just past the government space-listening station, the road just ends in a patch of lava. Rough paths and an eerie peaceful quiet, not twenty miles away from a roaring metropolis. On the way there, you go past some rough patches of poverty. We would have driven past the community in this story without knowing it. But as I said--no expert, which is something I share with many folks drive-by commenting on this. It's not just homeless kids. It's a whole community.

That community is Pu‘uhonua O Wai‘anae (Refuge of Wai'anae), a community of about 250 houseless people, characterized by resident Twinkle Borge as  "Not homeless-- a village without a place."

Hawaii is a tough place to be homeless. On the one hand, the weather is generally on your side, but on the other, local authorities are not. While we were there, an early morning walk would get you free admission to the morning rousting of the homeless along Waikiki. Pu‘uhonua O Wai‘anae's residents are primarily Native Hawaiians and Pacific Islanders, long underserved and marginalized. Sweeps to clean out the homeless are not uncommon. And then there's stuff like this--some lady offered to buy any homeless people a bus ticket to Wai'anae (and offered a flotation device to anyone who wanted to donate some cash to her effort).

But Pu‘uhonua O Wai‘anae has been taking steps. With the help of donors, the village has purchased 20 acres of land to be used for affordable housing for the villagers. As part of that new, real location for the village, they have plans for a meeting house that will also be used for the education of the children (about 40 of them, who attend the Wai'anae elementary school), complete with a hotspots and, hopefully, computers (they already have one hotspot). The village has their own incorporated 501-C(3) organization (Dynamic Community Solutions) with a detailed, multi-phase plan for creating a place for themselves, as well as a website (Aloha Lives Here) that answers questions about the group and the plan.

Much of this seems to be because they have Twinkle Borge, who appears to be a force of nature all by herself. Like most of the folks there, Borge did not end up houseless because she lived a blameless, pristine life, but by God, if any of her press is even half-accurate, she has worked her butt off since joining this community. Pu‘uhonua O Wai‘anae has worked hard to operate a just community, a community that gets along with the more conventional community nearby. She and James Pakele, head of Dynamic Community Solutions) are the faces of this evolving tent city and its new future.

It's quite a story, and I wish I were in a position to learn more about it. It's certainly not the story lots of folks imagined when they reacted to that tweet. And while I agree that it would be nice if the sponsoring company (Mobile Beacon) just handed over the computers and the $10K, I'll also admit that framing this whole thing as a competition allows each of the ten groups to leverage some free publicity (like the news story in the tweet, or this post), which is hugely valuable in its own right.