This has been going on for a while, but just in case you've missed this rhetorical shift, I want to highlight the tweaking of a reformy talking point.

The classic answer has been "because students need to escape failing public schools." Or "because the quality of your education shouldn't be determined by your zip code." 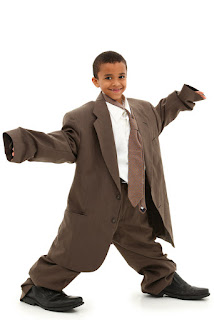 Betsy DeVos herself used to call public education a dead end. But DeVos (who, as I keep saying, is not a dope, despite the commonly shared cartoon version of her) has been steadily tweaking language in an apparent attempt to stop pissing off and energizing her opposition. So she has a new answer to this sentence completion puzzle. You can hear it in this radio interview that Betsy DeVos did with Chris Salcedo, a conservative radio talker in Texas.

It's fit. DeVos and some other reformsters have largely stopped talking about bad failing public schools and the terrible teachers who work there. Instead, the new idea is fit. The parents should be able to choose the school that best fits the student's needs or desires or "learning style."

From the reformster POV, there are a couple of benefits to this talking point.

One is that it is less confrontational with the public school system. "We're not saying that your school sucks; we just think another school might fit Pat better." Ironically, this is a flipped version of the argument used to push some students out of private and charter schools-- "We think Pat would be happier in a school that fit his needs more."

Another is that this is a good cover for one of the DeVosian goals-- tax dollars for private Christian schools. If Pat's family thinks that the best fit would be a school that is soaked in their personal brand of religion, well, that's a feature, not a bug. Never forget-- one policy goal that does separate DeVos from reformy ed secretaries before her is the goal of getting Christian churches in charge of education.

Best of all, the fit argument helps get past the poor folks incremental foot in the door that has marked choice policy before. In other words, a common policy trick has been to say, "Well, we'll just offer vouchers and choice to students who are in failing schools because they must be rescued (but not by, say, properly funding and supporting their public schools)." But the "best fit" argument knows no bounds. Selling choice to suburbs and wealthy communities, where the public schools are well-funded and supported, or rural communities, where the public schools are a beloved community institution-- well, those roadblocks are part of what has made the charter boom slow to a crawl. But the best fit argument can be used anywhere; you don't need a disaster, real or created, to make this pitch.

Mind you, it's all still baloney used to mask the privatizing of public education. And it's weirdly backwards. Where are you most likely to find a school that offers a variety of options, a choice of education paths, and a staff of teachers who represent a broad range of styles and approaches? That would be in a public school system. Where are you most likely to find a school that requires all teachers to teach the same content in the same style, with everyone lockstepped into a set of rules and approaches that permeate every room in the building? That would be the charter sector. And, as always, let's not forget where we find schools that can reject any student for any reason, including background, religion, or just "not fitting in"? That would be the world of private schools.

If finding an education that fits a student, including a variety of options so that the student can figure out what that best fit is, all under one roof so that families don't have to start over at a whole new school every time they want a change-- well, that's a public school. As always, school choice is about school's choice; not so much about students finding a school that fits their ideas about learning, as it is about private and charter schools finding the students who fit their ideas about teaching. It's charter and private schools that offer one size meant to fit all.
Posted by Peter Greene at Friday, June 07, 2019