If there is one signature feature of a DeVos doctrine, it's that the government should never, ever stand between a business and its revenue stream. 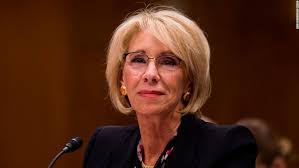 That part of the doctrine was on display yesterday as DeVos officially announced her intention to let for-profit colleges do whatever the hell they want. Okay, that may be an overstatement. What she actually did was roll back the Obama-era requirement that such schools either show that their graduates actually land jobs, or the school would lose access to all that sweet sweet federal money. That was a powerful piece of leverage, because the for-profit colleges focus on veterans and poor folks with the result that a great deal of the for profit college revenue stream comes from the feds, who loan to the students and pay off the schools, guaranteeing that the for-profits get paid and that the students are in hock to the feds.

Rolling back Obama-era protections is problematic because the Obama administration itself did a super-lousy job of riding herd on these predatory schools. At one point, having announced that they were now by golly going to clamp down those outfits, they turned around and bailed out one of the worst. Then, when that outfit collapsed anyway, the feds let them be sold off to a debt-collection agency.

It was after all that foolishness that the administration finally implemented a gainful employment rule. This was also followed by  students scammed by the for-profit agitating to be released from their debts. The Department of Justice requested that the Department of Education simply release the portion of that debt that they held; they refused.

All of that happened before Trump ever descended the escalator to unleash havoc on US politics; it's only fair to note that this is, in many ways, a mess that DeVos inherited and which the Obama administration never exactly showed signs of fixing.

Last week, DeVos was sued--again--by a boatload of students stranded in massive debt. The student position is that they were defrauded and their loans should be forgiven.

DeVos's position about loan forgiveness has been to simply pretend to lose all the paperwork and never process any of the requests to have loans erased. Having ignored the rules for two years, DeVos last year tried to get rid of them, and this week she finally did it.

The USED position is that a combination of transparency (defined as "a  government website that students will have to find and decipher on their own") and caveat emptor is the solution to all of this (though presumably the almost-200,000 debt-loaded students asking for forgiveness will also need a time machine to get any use out of the transparency).

The repeal of the rule will take effect in 2020, and it will remove any sort of useful consequence for for-profit misbehavior. It's perfectly in line with the DeVos doc trine, which says that the government should not interfere in any meaningful way with a business trying to fleece its customers make a profit by marketing baloney offering a service. Since the moment she sat in front of te Senate confirmation hearing, DeVos has been consistent in expressing that she has no intention of putting the protection of students and "customers" ahead of the interests of businesses. This is just more of the same. Ka-ching.
Posted by Peter Greene at Saturday, June 29, 2019
Email ThisBlogThis!Share to TwitterShare to FacebookShare to Pinterest