Can SEL Learn From Common Core

At the American Enterprise Institute (AEI), Michael McShane (EdChoice) recently took a look at what the nascent social-emotional learning movement for education could learn from studying the checkered history of the Common Core. It's an interesting paper both for what it says about SEL and for what it gleans from the story of the Common Core, operating as it does from the reliably free-market loving reformy point of view of AEI. Plus it includes one of my new most favorite Arne Duncan quotes.

The paper opens with a history of the Core and then goes on to draw four lessons. Let's take a look.

McShane takes a good, honest look at the downward trajectory of the Core's popularity with everyone, and notes "It's fair to say that the implementation of Common Core did not live up to advocates' expectations." He notes the phenomenon of how Race to the Top "turbocharged" adoption of the standards, in some cases before they were even finished (he does not talk about how Bill Gates helped drive the whole process). He notes also that the standards came hand in hand with the Big Standardized Tests, and reminds us all of some of the grotesque over-promising that Duncan offered up regarding the BS Tests. McShane takes us back to Duncan's speech announcing the grants for the PARCC and SBA tests: 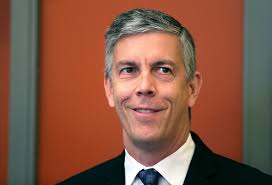 In that same  speech, he set a pretty high bar for these two tests. He said they would "be an absolute game-changer in public education ," "make widespread use of smart technology," and "provide students with realistic, complex performance tasks, immediate feedback, computer adptive testing, and incorporate accommodations for a range of students." He harped on new testing technology that would allow students "to design products or experiments, to manipulate parameters, run tests and record data." He  said tests would be able to "incorporate audio and video" and situate problems "in real world environments, where students perform tasks or include multi-stage scenarios and extended essays."

As McShane dryly notes, "neither the standards nor their assessments lived up to advocates' hopes or promises."

And here comes Duncan to sum up the whole mess with a quote that I don't remember hearing before, but which is just kind of awesome. Speaking to the American Society of News Editors in 2013:

So what lessons does McShane see in the Bay of Pigs calibre debacle that was (and unfortunately still is) the Common Core, and how solid are those lessons?

First Lesson: Advocates should clearly define what they mean by SEL, and they should focus on getting stakeholders to support it.

Close. I think the unwillingness to fully and precisely define what SEL (and personalized [sic] learning) are in part a reaction to a different lesson of the Core (we'll get there in a bit). It's also a side effect of so many vendors rushing to market with their own products, each built on their own definition of SEL.

I think the second lesson is off the mark. It wasn't just that stakeholders didn't support the Core (as McShane shows in the earlier part of the paper, initial support was actually pretty solid). It's that the whole business was implemented top-down, which meant that it took a while for folks in the field to find out what was really going on. Top-down implementation is always problematic, because it always involves stakeholders after the fact. Everybody goes to that leadership class that says you have to get buy-in from the stakeholders, but nobody pays attention to the part about how you get buy-in by letting the stakeholders actually build the thing. Put another way, you can get buy-in for your program, or you can get a program that looks exactly the way you want it to, but you can't have both.

McShane gets at this by pointing out that advocates can't use a strategy of talking to only a few key people, and this is a useful insight for many education businesses (like the tech company that sells its product to the superintendent, but not the teachers). If you want it to take root, you have to work with a whole lot of people, not just a handful of "key" ones.  For instance, if you are tech billionaire with a new set of educational standards to push, it's a mistake to decide that all you have to do is sell them to the secretary of education and you can just ignore everyone else.

But all of this misses one other crucial point. The best way to get buy-in and support is to have a program that doesn't suck. The Core was horribly and sloppily implemented and just generally mismanaged top to bottom, but if they had been awesome standards, teachers would have found a way around the rest.

This is the worst kind of business logic--  the quality of the product doesn't matter as long as we market it well. People didn't reject the Core because of poor marketing or clumsy implementation; they rejected the  Core standards because they are lousy. They rejected the BS Tests because they stink.

Do you want buy-in for your SEL programs? Step One is to develop programs that don't stink.

States and districts were not ready to put the standards in classrooms. Publishers were not ready to put the standards in everyone's texts. Hence the widespread phenomenon of slapping "Common Core ready" stickers on covers of texts that had come off the press before the Common Core was even a speck David Coleman's eyeball. Regular readers know I have no love for the Core at all, but the Core was blamed for a lot of crazy classroom baloney that was never the fault of the standards at all.

McShane says that before any states roll out SEL, they need to make sure that there is space for it, which is dead-on. If you are going to give a teacher one more thing to do, you owe it to her to tell her what thing she now will cut from class, because there is no "extra" time in which she can implement your latest new add-on.

Also, have you trained and prepared teachers to do the SEL thing? And do you have resources to use that are actual legit resources. And how will SEL fit with the other policies you're already following. Common Core absolutely failed on every one of these questions.

I've disagreed with McShane on a variety of ideas over the years, but boy does he get this right:

Common Core was a windfall for cranks, charlatan s and con artists.

As I often complained, the Core had no "infrastructure" or organization minding the store. The creators peaced out to their next big gigs immediately, leaving absolutely nobody in a position to say, "No, that's just a pile of snake oil and not legitimate Common Core stuff at all." Hundreds of scam artists smelled a chance to cash in, and they took it.

Now, where McShane and I may disagree is on this: I'd argue that Common Core was charlatans and con artists all the way down to the creators of the program. It was meant to crack open a stubborn market and provide profitable opportunities for anyone quick enough to cash in by selling a product or getting in on the data mining, and it was the people who sincerely thought it would improve education who were the anomalies, not the opportunistic scammers.

But the lesson remains the same for SEL, in fact, even more so. Common Core opened up a market, and now there's a whole bunch of money grubbers sitting, waiting, and salivating over whatever Next Big Thing is about to appear. SEL advocates had better come up with ways to police their ranks and to help schools distinguish between worthwhile programs and costly baloney.

McShane offers an interesting model for navigating issues of dissent, with a scale that runs from Proponents and Allies to Critical Friends to Skeptics to Wedgers to Con Artists and Nutjobs. To someone who is too defensive or not very discerning, the Con Artists look more like allies than your critical friends, and again, Duncan provides a useful example as someone who rejected (and still rejects) anything critical about the Core. Wedgers would be the people who try to force their own ideas into the movement, which is such a real thing-- "I think that this kind of pedagogy is what everyone should be doing, so therefor it must be part of this new policy." Teachers know this one from  all the times they sit in professional development sessions asking, "But why are we required to do Y in conjunction with policy Z? What do those have to do with each other??"

Common Core was so thoroughly branded that when people got to hating it, that brand became a big fat target, to the point that many states and Core advocates stopped using the words, and the Policy That Dared Not Say Its Name became "college and career ready standards." States scribbled out Common Core and wrote in their own state name. And every big policy developed since has avoided coming up with a catchy title. Is it personalized learning or competency based education or one of the other dozen names given to this Next Big Thing? We'll probably never know, because nobody ants to brand it clearly enough to connect it with specific expectations or to risk directing backlash.

So SEL fans-- brand it well enough that people know what you're talking about, but not so well that you take a big hit if it all blows up in your face.

Posted by Peter Greene at Monday, June 10, 2019
Email ThisBlogThis!Share to TwitterShare to FacebookShare to Pinterest