When Administration Loves Management By Screen

It often seems that public education is where played-out business management fads go to die. Decades ago, when Management By Objectives had become yesterday's business news, it reappeared in schools as Outcomes Based Education. And now that Management By Screen has enjoyed a trip around the industrial park, it is catching on with school administrators across the country. 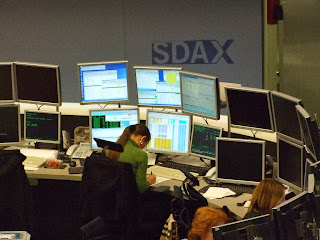 No Child Left Behind set the stage by requiring a Big Standardized Test and the data that the test would generate. Race to the Top doubled down on data, and Common Core standards allowed the appearance of more granular data, with each standard collecting its own little pile of numbers. The call went out for decisions that were "data-driven," from district decisions based on the numbers all the way to classroom instruction that is supposed to be "data-informed."
Data-loving administrators began to realize that they could go days at a time without ever having to leave their offices.
Schools have been buying up a ton of test-prep tests, multiple choice standardized tests that mimic the Big Standardized Tests from the end of the year. These tests can be taken on line by the students, and so immediate spit out bunches of data in a variety of slick and attractive reports. Principals can pull up graphs and charts and determine which students are a danger to the school's scores and who need to be hammered with extra data-informed instruction ( the principal can also find the students who will score well easily and the students are so hopeless that there's no point in using resources to try to pull them up). They can check that data against test result data. The principal can see, sometimes (though some of these data tools can be a bit obtuse) which standards are a problem; the principal can then fire off an e-mail to Mrs. McTeachtester that her instruction should be informed by more time spent on standard RL.5.2B.
Once the principal is smitten by screen management, other functions of the school can be handled via software-generated reports. Attendance, discipline, lunch-- everything about the students can be reduced to numbers and thrown up on a screen. Managing staff can also be handled via screen. Everyone is familiar with the meeting that should have been a e-mail, but if you work for a MBS devotee, you'll experience e-mails that should have been a face-to-face interaction (it's much harder for your subordinates to disagree with you effectively via e-mail).
MBS presents a variety of problems. Do the numbers mean what you think they mean? The lowered numbers for student discipline could mean that your student body is behaving better, or it could mean that your staff is tired of handling discipline via digitized forms.
MBS is also problematic because schools run on relationships, and MBS doesn't do much to build them. If your students can't identify you because they rarely see you in the halls or the cafeteria, you haven't built much of a relationship. "I don't recognize your face, but I know your scores," doesn't really warm anyone's heart. Nor do you build much of a relationship with people who have devoted their lives to the entire work of teaching when you send the message that only scores are critical. "I don't need to stop by your classroom and see what you're doing-- I can just look up your numbers," is a chilling, dismissive message.
The big irony here is that teachers have always gathered mountains of data, tons of information about their students. But because they don't reduce all that information to numbers and record them in some fancy software, all that information is ignored by data-centered managers. Management By Screen is like management with blinders on, seeing only one small slice of information and mistaking it for the full picture. Some administrators may claim that their data-based management is informed by many other sources of information, but if checking out those data reports is the most important part of their day, they are just kidding themselves and short-changing their schools.