How Teachers Avoid the Common Core

Here's an important thing to understand about the Common Core Standards--nobody is in charge of them.

Many standards have official gatekeepers. For instance, the National Institute of Standards and Technology in Colorado is the official civilian source for the answer to "What time is it?" through the national atomic clock. 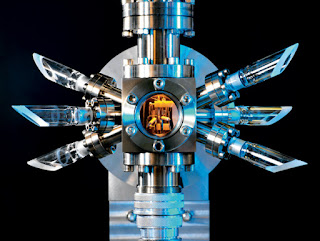 There is no such body for the CCS. When the standards were first unleashed, the official word was that a state could not change a single word of them, and the states could add no more than 15%. The unanswered question was, "Or what...?" There has never been an official body to monitor state use of the standards. The folks who wrote the standards might have fulfilled such a function, but they dispersed almost immediately to new jobs (David Coleman took over the College Board, Jason Zimba booked some consultant gigs, etc). Sure, there's a site where you can look at the standards and read some PR, but it's the equivalent of a business site that won't let you contact the company or order product.

There has never been an official Common Core office to say, "This is correct, but that is not."

The implications for the use of the standards are huge. There is not, for instance, a body that approves whether or not a textbook can call itself "Common Core ready." Some organizations have tried to fill that gap by doing reviews based on textbook alignment to the Core, but those groups are themselves taking an unauthorized stab at what the Core says.

When the Core started finding its way to individual districts and schools, an army of consultants was unleashed to lead sessions on "unpacking" the standards. At these sessions, teachers would be put through the painstaking process of saying, "Well, what this standard is actually after is this..." with an explanation of what the consultants believed the standards said. Again, there was no oversight, no authority to "certify" that a consultant had a True Understanding of the standards.

That process was often followed by alignment--a process by which curricula were supposed to be written to match the requirements of the newly unpacked standards.

Problems emerged almost immediately. For instance, the lack of a Central Common Core Office meant there was also no Common Core review and revision process. If 500 schools all discovered what they believed was a flaw, omission, or misplacement of a standard, there was nobody to call, no process by which the regular review of the Core would lead to a Core 2.0 that improved the flaw. The Core's writers were either so confident or unconcerned that they created a system in which the standards would be more set in stone that the United States Constitution. All of that meant that if a district or state felt that there was a flaw in the standards, they had no option other than to just be rebels and change some standards anyway.

Another issue was the parallel roll-out of the Big Standardized Test, a test which immediately signaled that some standards mattered and some did not. Some states gave some standards fancy names like "anchor standards" which meant, roughly, the only standards you need to care about. For instance, there are ELA standards about speaking and listening, but they don't matter, because speaking and listening will never be on the Big Standardized Test.

A few years in, all of these factors contributed to one important revelation.

What happens to a teacher who doesn't teach to the standards?

Oh, teachers still had (and have) to submit lesson plans that show alignment to standards, based on curriculum that is aligned to the standards. However, the alignment process is simply a piece of bureaucratic paperwork-- you can simply write down the lessons and units that your professional judgment considers best, and then just fill in the numbers of various standards in the blanks. Maybe you have an administrator who will hold your feet to the fire ("Mrs. McTeachalot, I believe your use of standard RL.5.2a is not entirely on point"), but mostly, life will go on, your paperwork will be filed, the district's report to the state will show that teachers are teaching to the standards with fidelity, and you can close your classroom door and do what you know is right. As long as the paperwork is good, reality can take care of itself.

This avoidance of the Common Core is also widely practiced by teachers and administrators who will deny that they're doing it. Innumerable teachers have written glowing essays about how they've used the Core to open up new avenues of swellness in their classrooms, and then go on to describe lessons that have nothing at all to do with the standards. But that's where we are. I can claim that my lesson about students meditating on a head of cabbage is Core aligned, and I may know I'm lying, or I may sincerely believe that I'm doing great Core things, but it doesn't matter--nobody is ever going to show up at my classroom door to say that the lesson is not Core-approved.

There are teachers who are less able to escape, who are trapped in micromanaged situations where administrators insist on scripted lessons straight out of the box. Mind you, those scripted lessons may also be a poor representation of the Core, but that's a small matter compared to scripting (it's a topic for another day, but the short line is that any administrator who insists their teachers teach from a script should be banished from education forever).

The Common Core Standards remain a sort of toxic vaporware--dangerous and damaging when first released, but slowly dissipating into a vague and formless while people try to recover from the damage they originally caused and are, in some places, still causing. We can only hope more teachers figure out how to escape.