AZ: Why Conservatives Should Oppose ESAs

Education Savings Accounts are the uber-vouchers, the last stop on the reformster railroad before we get to the place where schools simply disappear.

ESAs come in a variety of flavors, but here is the basic idea.

With charter schools, you can send your child to any school in the system, and tax dollars are sent to that school to cover the cost of educating your child.

With a voucher system, tax dollars are given to you and you can use them at any school you wish to send your child to. 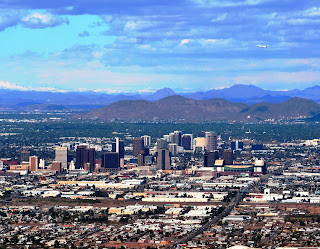 With ESAs, you get some money, typically via a debit card, and you spend it on educational whatever. Charter school, home school supplies, tutors, books. In most cases, if you spend very little of it, you can hold onto it for college expenses.

We can talk about all the reasons that left-tilted folks don't love this idea, but not today. Because today we're talking about Arizona. Arizona has had an ESA program in place for students with special needs, but the legislature recently moved to expand that to all students, and now a bunch of scrappy activists have managed to get the expanded ESA rule put on a ballot. Arizona voters have a chance to vote ESAs down, right there in heart of Koch Country, in a state where left-tilted folks are fairly rare.

So let's ask, instead, why a conservative, a right-leaning free market voter should defy the state's governor and the Koch interests to vote down ESAs. They may not consider the issue of draining money from public schools a big deal, and they may, in fact, be in favor of school choice. But from the conservative view, there is a critical issue with ESAs.

Charter schools face some degree of accountability, both financially and academically. In theory, at least, there is an authorizing group that is responsible for making sure the charter school is reasonably decent. Even a voucher system allows for some oversight of the schools that are receiving the tax dollars.

But Arizona's ESAs, like most existing and proposed ESAs, give the family a card (Bank of America, in Arizona's case) with a balance on it that they may spend for "educational products and services." So private school tuition, or a tutor, or coaching software, or books, or whatever. Arizona parents have to agree not to spend the money on consumables like paper and pencils, nor is the money to be used for transportation. Advocates complain when I say that ESAs could be used to buy a PlayStation and some educational games-- but what in the law says they couldn't (maybe the "technological devices" provision, but that's awfully broad and vague)? And what in the law provides any sort of oversight to catch any such abuses? Can you imagine the kind of manpower that would be needed to check up on every family with an ESA to make sure they are spending tax dollars responsibly-- it would be expensive and time-consuming and intrusive and it's not going to happen.

The state of Arizona is essentially offering students a cash incentive to drop out of school. Take the few thousand dollars, tell us you're doing something educationy with it, and no questions asked.

Yes, accountability-ish steps have been taken along the way. For instance, according to a report from EdChoice:

For example, in 2013, legislators gave the department the authority to create a 1-800 number for fraud reporting and a website where parents or vendors could report fraud.

But if the ESA money is spent and used within the home, who is going to see anything? And which citizens will be well-versed enough to know fraud when they see it? Advocates also call for "surprise" audits of families and making sure that only certain vendors and products are "unlocked" for the card, similar to what some states now do with food stamps. Can those locks be circumvented? And where is this staff that is going to audit family ESA spending for thousands of families more than once a year-- the law is capped at 30,000 students, but there are 1.1 million students in the state,
and ESA backers would like to include them all.

In fact, the ESA program already in place has been an accountability mess. The credits can be converted to cash by buying books, then returning them. Some took the ESA-- then returned to public school. Some crafty families parked the money in 529 college savings account so that the state could not get it back. There is even reason to suspect that ESA money was used to get an abortion.

The kind of abuses possible with this sort of system stagger the imagination, and the money drained out of the larger education ecosystem would be a loss to public, private and charter schools alike. Plus, the end result will be students whose education was inadequate and who cannot contribute to society.

If you're a conservative, you may well like the idea that nobody should get welfare unless they can prove they're working or incapable of working. You don't want to see your tax dollars wasted (and there has already been some pretty spectacular fraud in Arizona). If you are giving somebody money to get an education, would you not also want to see some proof that they are actually getting one? Arizona's legislature is tough on welfare recipients-- but not on ESA recipients, even though an ESA is basically education-flavored welfare.

Proposition 305 will be up for a vote in November. Here's hoping that Arizona voters from across the political spectrum do the right thing and roll back ESAs in Arizona.