Everyone has their favorite metaphor for understanding education. This is mine.

An area of learning is a block of territory-- let's call it a square ten miles-- to be explored. Some of the territories are well-traveled, tramped flat by the footsteps of a million people who have gone before. Some are rougher, more untamed, more filled with little-examined places.

Our method of exploring these territories is our process of learning. 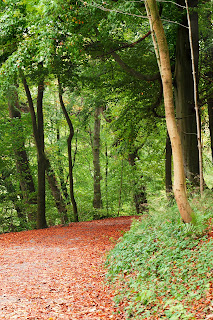 The classroom teacher sets out a path for students to explore the territory. There may be places to stop and rest along the way, and the path may have been carefully cleared of obstacles. Sometimes students wander off the path, and the teacher has to go find them and bring them back-- that's one reason the teacher should know every inch of the territory like the back of her hand. Not only will students wander off the path, but sometimes a student will see something interesting and unusual off the prepared path, and the teacher needs to be knowledgeable and flexible enough to take the whole class off-path and grab that unique teachable moment. But within the set time, they would have to make their way to the set exit point. Of course, the better the teacher knows the territory, the less the class has to depend on a pre-cleared path.

In more rigid classrooms, the teacher (or curriculum director or course-of-study-in-a-box) lays down railroad tracks. Each student is strapped into a seat; nobody leaves the train. The students proceed together along a pre-set path at a pre-set speed, and the teacher's job is to travel with them, pointing out the pre-selected sights along the way. At each stop on the track, the teacher and students would look at what that stop's lesson is. At every stop, every student gets off, gets the lesson, and gets back on the train. See something interesting away from the tracks? Can't stop for it. Of course the teacher doesn't really need to know about the territory; she just needs to know about the parts right next to the tracks as they lead to the exit point.

True personalized learning would work like this: we'd drop the students off somewhere in the territory. Then the students would each select where they wanted to go and what they wanted to look at. When they had satisfied their curiosity about one location, they could move on to another. The teacher would be an expert guide, able to answer questions, offer directions, and provide explanations at every location within the territory. In a traditional time-based school, the deal would be "You have 180 days to cover as much territory as you can, and then you'll move on." Each student would create her own path, select her own destination.

The personalized [sic] learning that is being marketed is just another train, because most often what is actually personalized is not instruction, but pacing. Every student still rides the same train on the same tracks to the same destination. The only difference is that when students get off at a stop, they can stay at that stop until they get it, and then board the next train. Proponents are silent on what happens if after 180 days or 13 years, that student is still on a station far away from the exit point, and there are no more trainings coming to pick her up.

The underlying theory of Common Core is that all we need to teach students is the skills involved in riding a train, so we practice having the students sitting up straight, properly fluffing a pillow, practicing walking in the aisles. The train has to stop every 500 feet for a Train Riding Practice test before the final Big Train Riding Test, so this train never does cover very much territory.

Charter operators want to build their own train, and to do it they need to take the wheels from the public train. Sometimes the charter ends up being a caboose sitting by itself in the woods, the students stranded and the operators long gone with the money they took for tickets. Other charters figure their train will go faster if it's painted really nice. And some charter operators just dump the students by themselves in the middle of nowhere with a baloney sandwich and some string cheese.

Education policy is written by men who have never actually visited the territory, but they have seen pictures, so they will decide based on pictures where the paths should be cleared or where the tracks should be laid. Cyberschool students also ride a train, but they never get off it, they have to shovel their own coal, and the windows are all painted black.
Posted by Peter Greene at Wednesday, October 03, 2018