This weekend is arguably the biggest weekend of the year in my little corner of the world. Johnny Appleseed lived in this area briefly a couple of centuries ago, and on that thin peg we have hung a gigantic local festival, complete with crafts, food, strange tchotchkes, a car show, and a theater production. 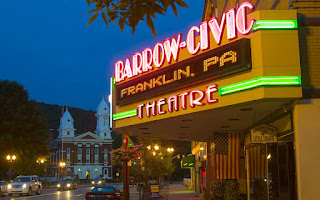 Our local theater group owns and operates a refurbished local theater, a beautiful facility despite the lack of fly and wing space. The group puts on about six productions a year; the rest of the time the theater hosts other performances. I've been doing directing of one sort or another with that theater group for thirty years now, wearing a variety of hats (this time it's stage director, lighting designer, and pit orchestra conductor). This particular production (Mel Brooks' The Producers) has been a real adventure, but I wanted a real adventure to carry me past the beginning of the first school year of my retirement.

I bring all of this up because I never get involved with a theater production that doesn't get me thinking about teaching in general and leadership in particular (also because I like to brag on my little town). Community theater directing has to be, in some ways, more challenging than working with the Big Time Pros. BTP can be less-than-delightful because they are paying people; my casts are all volunteers doing this for fun. BTP can say "the lead should be able to sing, tap and act, and he should be blond, blue-eyed and 5' 3" tall" while community theater directors say "Okay, these are the fifteen people we've got to work with-- how can we make them fit into this show?"

Directing is just like management-- your job is to get the best possible performance out of your people. That means supporting them and providing what they need to succeed. It means providing a overall vision and direction, and many directors have lots of ideas about how to do this. Some are less productive than others.

Micromanagement is not uncommon. This director tells her actors every single exact move and moment, every little gesture, every bit of business. If there is a moment in the show that she hasn't covered (and there always is) the performers stand awkwardly paused because they don't know what to do. On the other end of the scale we find directors how under-direct, who tell the performers, "Just go out there and say the lines. Stand somewhere. Or maybe move."

The sweet spot is somewhere in between, and the critical part of the vision thing is to explain some sort of answer to the question "What are we trying to do here?" Tell the actors the essentials about their characters. Tell everyone in the production about the style and theme of the production. Tell them what emotional notes we want to strike.

In short, establish the guiding principles of your work.

If you can do this clearly and effectively, and if you have chosen guiding principles that are sound and that are supported by the work, then magical things will happen.

Actors have a million decisions to make in the course of a performance, and if your guiding principles are solid and sound and communicated, they can use their own expertise to make those choices in a way that contributes to the show. Mind you, each one will have her own way of filling in the blanks, based on who they are, what they know, what they've learned, and how their character fits in the whole piece. But you have to trust them. You may help them spot some choices they didn't see, or be a set of eyes to spot choices that don't fit quite right, but mostly you have to trust them, because as a director you simply can't make every single choice for them (there are to many choices) and as a director you can create a hard and fast set of rules that will serve every actor and every character being portrayed. And some choices are rooted in very practical issues (can this actor change costumes fast enough to make that entrance? can we build that particular set piece?) and sometimes the art takes a backseat to the limits of the facility (did I mention the theater's lack of fly and wing space?). And you have to make sure all the technical support, all the lights and sound and set are there to help support the actors in their work.

If you know what the play's about, if you know what the point is, if you can just keep your eye on the ball and not loose track of the main thing-- AND you can communicate that to everyone else, AND you can select people who are talented and able and willing to grow into the experience AND you can figure out artistic solutions to practical problems AND you can give them the freedom to use the skills and art that they brought to the table-- if you can do all that, then the curtain will open and your audience will be treated to an amazing, beautiful, moving display of magic wrapped around a core of something true.

Two performances left. Stop by if you're in the neighborhood. Unlike a school or a classroom, a show only comes to life for a short piece of time.