There is so much about public education that Betsy DeVos appears not to understand. But judging from her speech at Harvard last night, she is getting more comfortable with her ignorance. Here's one moment I want to focus on.


And doesn’t every school aim to serve the public good? A school that prepares its students to lead successful lives is a benefit to all of us. The definition of public education should be to educate the public. That’s why we should fight less about the word that comes before “school.”
I suspect all of you here at Harvard, a private school, will take your education and contribute to the public good.
When you chose to attend Harvard, did anyone suggest you were against public universities? No, you and your family sat down and figured out which education environment would be the best fit for you. You compared options, and made an informed decision.
No one seems to criticize that choice. No one thinks choice in higher education is wrong. So why is it wrong in elementary, middle, or high school? 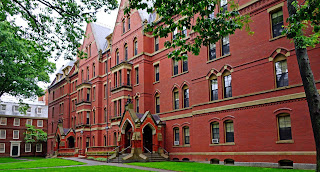 I haven't edited anything here-- this exceptional piece of rhetorical whiplash is as it appears in the published version of her prepared remarks.

To summarize-- education should be for the public good, which is why families should be able to choose schools based on their own private interests.

But comparing public K-12 education to higher education is actually a good way to highlight how school choice can be a lousy idea.

Harvard Is Not about Choice

Students do not choose Harvard. Harvard chooses its students.And like almost all colleges and universities, Harvard requires students to maintain a certain level of achievement so that they can stay. "Your family sat down and figured out which education environment would be the best fit-- and then you hoped and waited to see if they would let you in."

Of course, the unspoken subtext here is that if you want to go to Harvard, you have to prove you deserve it, either through your academic achievement, your family connections, or your father's big fat bank account. If you don't deserve to go to Harvard, you'll just have to settle for whatever place you DO deserve. And your deservingness will be determined by admissions offices and the thousand other little cultural hurdles you have to jump.

That's the subtext of DeVos's "best fit" rhetoric-- it's the same subtext as the admissions officer or guidance counselor or apartment complex administrator saying, "Well, wouldn't just be happier in a place where you fit in a little better? You know-- with people more like yourself, with a similar background (and race)."

Higher Education Is Not a Leveller

Public education is still touted as the opportunity to level or escape class boundaries. That's arguable, but higher education makes no such claim. Harvard has no grand interest in erasing class divides in the US, and in fact colleges do a much better job of solidifying those divides than erasing them. Rich, well-connected folks get Harvard; poor folks get Podunk Community College.

And yet no cheerleader for choice, least of all Betsy DeVos, has an answer for who will take responsibility for the students who do not make it into a charter-choice system. At best, the suggestion that those leftover students, the ones that no charter wants, will be left behind in the public system (you know-- the one that's not allowed to reject students for no good reason) that is increasingly underfunded and underresourced because the money is all being diverted to charters.

Higher education doesn't have to care about the leftovers because we still accept that not everyone will want to go to college. That marks a substantive different between higher education and the K-12 system. DeVos is correct in saying that public education should educate the public-- all the public, not just the select portions of it.

Higher education is also instructive about how quality fares in a choice system. Because on the one hand, you have Harvard. And on the other hand, you have schools that are sports programs with a few classes attached. And on the other other hand, you have schools that award diplomas that aren't worth the paper they're printed on. The lack of serious accountability has created a system with wildly varying levels of quality, and DeVos, who has repeatedly stood up against accountability measures, is okay with that. American taxpayers should not be-- not when it comes to K-12 education.

Whose Interests Are at Stake?

In the higher education system, it is primarily the interests of students that are at stake. In K-12, all of society has a stake in the system. Public schools do not exist to serve only parents. The interests of the students, their future employers, their future neighbors and co-workers, their future fellow voters, the community as a whole-- all of these interests are represented. That's why all taxpayers chip in (unlike the higher ed system). That means that all stakeholders get a say, and all public schools should be subjected to a considerably higher level of oversight and accountability than a school ike Harvard.


Why is choice wrong for K-12? Believe it or not, I don't think it has to be wrong. But as currently proposed and practiced, it's wrong because

* The system must be fully funded. You cannot run three schools for the money previously spent on one. Don't make it a zero-sum game-- fully fund it.

* Do not leave leftover students behind. Do not push students out because they don't fit your model. If you want choice, make it parents' choice, not the school's choice.

* Students before profits. No for-profits choices. And stringent rules on not-for-profits, most of whom are currently just for-profits with good money-laundering systems.

None of these are features of the system that brought those students to Harvard. That's why choice in higher education, while not always very successful, is less objectionable than choice for K-12.


Posted by Peter Greene at Friday, September 29, 2017
Email ThisBlogThis!Share to TwitterShare to FacebookShare to Pinterest