Illinois has just joined the ranks of the education voucher states in the US after a protracted mess of shenanigans and skullduggery.

Mostly what the legislature and Governor Rauner did was use an artful combo of bribery and hostage-taking to leverage a big, fat pay day for voucher schools. If folks wanted to free up funding for schools (handy, now that the school year started), they would have to give up the voucher dollars. As protective cover, they were given a new funding system and a couple of pieces of gold for public schools. 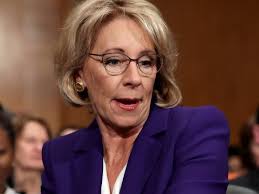 The depressing news here is that Illinois once again shows that public schools cannot look to either party to defend public education. Democrats took the deal and voted for Voucher Christmas. Some folks called them out, but most of the press about the bill has stuck to the script-- this is an awesome win for public schools and don't pay any attention to that voucher program (which is, you know, not exactly really a voucher program). It's a compromise, a bipartisan happy day.

Except that one voucher fan didn't get the memo on how the bill was supposed to be properly spun-- Secretary of Education Betsy DeVos:

Real change and innovation in education will not come from Washington—it will come from states where parents and students demand more education options and have their voices heard. I commend Gov. Rauner and Superintendent Smith for their leadership in making Illinois the 18th state to adopt a tax credit scholarship program. By expanding choices for families and focusing funding on individual students, this program will help thousands of Illinois children succeed.


Part of the deal in Illinois was supposed to be that voucher fans (of all parties) would refrain from doing a victorious happy dance, that they would avoid saying out loud "We are one step closer to replacing public schools." But no-- there's DeVos, down in the end zone, doing her victory dance and spiking the ball and hollering, "In your FACE, public schools!!" Next time someone better make sure she gets the memo.

Posted by Peter Greene at Friday, September 01, 2017
Email ThisBlogThis!Share to TwitterShare to FacebookShare to Pinterest