One hallmark of the DeVos era has been a deep devotion to debt-- specifically the debt of students who tried to go to college, and making sure that Those People don't try to wiggle out of it. She has stayed close to companies in the debt biz, a biz that she has her own ties to.

All of this is why some folks have looked askance at her stated desire to shake up Federal Student Aid, the gazillion-dollar operation that helps finance so many college educations. At one point she wanted to spin it off into a stand-alone business, perhaps because that would insure that no future politicians would mess things up by forgiving student debt. 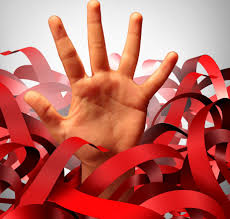 Now she has announced new contracts with some fun new playmates in the loan biz, and also, some no-more-new contracts for other loan biz folks who had previously thought they were doing okay. The stated purpose is to give FSA customers some world class service, and as one such customer may I just say "Oh Good God in Heaven can't you just leave this stuff alone!!??!!"

My older children graduated from high school in 2004 and 2006, then moved on to higher education of one sort or another. I made it a year or two, and then it was time to start borrowing, kicking off an experience that I have mostly blocked out of my memory because Sweet Jesus on a unicorn!

When I started, you had to deal with a bank to get the loan, which meant finding a participating bank with a pile of money, which involved filling out FAFSA etc, a royal pain of its own and heaven help you if you're divorced and not, as I was, co-parenting with someone who feels cooperative. What I didn't really understand at the time was that I was dealing with a bank, and a financial aid office, but also some loan outfit, but also the feds. I am not a stupid person, but I constantly felt like one trying to navigate that stuff. And naive-- believe it or not, there was a time when I was deeply worried that I would be so extended that the banks wouldn't lend me any more money. Ha!

So I started paying back one set of loans (one separate loan for each semester) and then child #2 started school, and we started over with getting money, but somewhere in the next year or so the feds decided that it would really streamline things to make the financial aid offices take point on the process which, well, I love those folks, but banker/loan officer was not necessarily the job they signed up for.

And the paying back. For a long time, I got little payment coupon books, and that was a helpful system except that during that phase the banks or ,loan companies would pass the time by selling loans back and forth to each other, creating new coupon books and putting new account numbers on the individual loans and not actually saying anything to me about it not buried by that cool technique financial institutions have of sending out 5,972 pieces of junk mail, within which is concealed 1 item you actually need. Anyway, it was during all this shuffling around that I discovered that I had been double paying on one loan and not paying another at all for like, six months.

Eventually, things settled down. All of my loans anded up in the hands of AES and Great Lakes, and the paperwork was clear and in plain English, and then they had websites that were also clear and easy to use (though for years I made AES send me paper copies anyway, because passive-aggressive crank).

After all these years, it was a system that actually worked. I'm even getting relatively close to the end of paying everything off, thinking every single time I make a payment "How the hell do struggling millennials have a hope of dealing with this kind of debt." But I'm almost there, and now they're going to screw with me again.

Supposedly, the feds will assign me a new servicer, at least for the Great Lakes loans; AES isn't mentioned in anything I've read which I presume to mean that it is really some other company with a mask on. I'll get some new friends to take my money and I'm sure that the whole switchover will go off without a hitch, especially since it's supposed to happen as the year turns over, but I'm sure that if we have a whole new administration that won't affect this at all (don't worry--that's not enough reason for me to vote for Trump).

But for the love of a good blueberry donut, you don't screw around with systems that are actually working. Well, not unless you are up to something. I don't know what DeVos is up to, but somehow in my heart I don't think it's really about insuring I have world class customer service, because world class customer service wouldn't refuse to honor the rules about loan forgiveness. The press release talks about things like measurable metrics, so we'll now deal with people who are focused on making their numbers. Cool. That never ends badly. Yeah, somebody is going to get serviced here. Don't get  me wrong--letting my children start out debt-free as adults is one of my prouder parenting achievements, but why does it have to be such a slog, and on what planet can we expect 18-year-olds to navigate it?  Why do I have the feeling that Betsy DeVos didn't just make things better.
Posted by Peter Greene at Thursday, July 02, 2020