Oh, Florida, what a crazy place you are.

Currently in the news is the Walton County School District, which just pulled over 50 books from its library.

The list, as noted in a district press release, was one that came from an unnamed "outside group" and included books that group "deemed inappropriate." It also notes it received the list "along with many other educational systems."

The list was quickly posted to twitter by Daniel Uhlfelder (who says the list came from a group associated with Moms for Liberty)-- here it is. 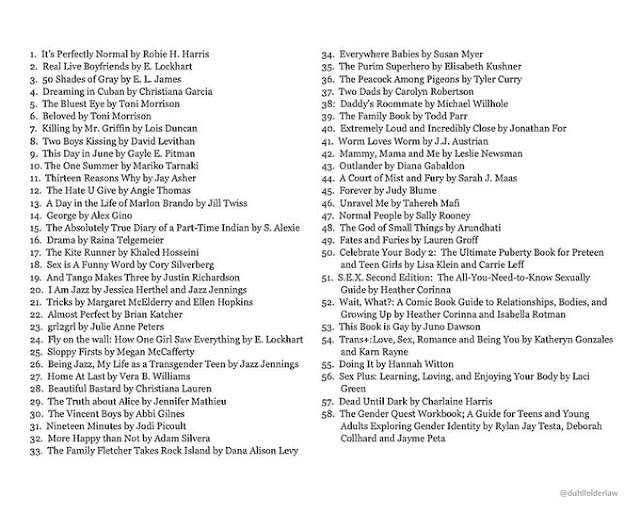 Most of these are the usual suspects, a bunch of familiar titles that get some folks heavily agitated. What got the school district and their superintendent plastered all over the interwebs is the inclusion of Everywhere Babies, by Susan Meyers and Marla Frazee.

This is nuts. We have this book at my house; we read it many many many many times to the twins when they were younger and it was a face of theirs. Its inclusion on this list tells us a lot about the people who are hunting down these books and demanding that school district Do Something.

When I saw the book title on the list, I though about a couple of images that might have triggered some activist's gaydar (it would have to be one of Frazee's images because nothing in the text could offend even the thinnest skinned humans). The book is loaded with images of many types of family combinations, from dad's holding kids to more elderly relatives. Could some of these be what excited book opponents? Let's look at possible offenders,. 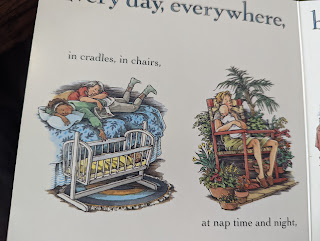 Are those two exhausted women (though the white-haired person could be a long-haired male) both parents of the child in the crib, or a parent and her friend? 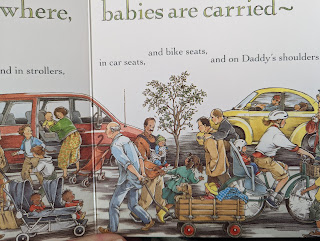 The most likely culprit, this street scene shows what appears to be two men walking with arms around each other (a thing that, as we know, only gay men do). 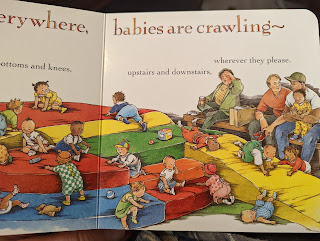 The two guys on the right look, to me, like two dads hanging out on the edge of the mall play area, but if your gaydar is on high alert, I suppose they could be read as a gay couple. 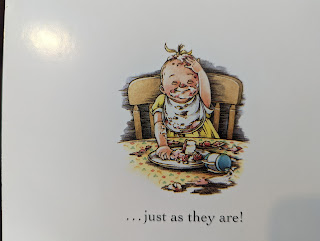 Pretty sure the sexual orientation and gender identity of this child is not clear. This picture just entertained the Board of Directors a great deal when they were toddlers.

So, what have we learned here?

Well, first, I'm not particularly excited by particular book removals. This Verbotten list will become a bunch of people's shopping list, and Everywhere Babies is going to explode in sales, which is great, because it's an awesome book. It has been true since Boston banned Huckleberry Finn-- a good, public banning is the best marketing that money can't buy.

It's also worth noting that the book also shows lots of loving hetero couples and parents acting parenty--in other words, providing illustrations of sexual orientation and gender identity, which means that this book, like many others, does in fact technically violate Florida's Don't Talk About Sex Or Gender Law (I know that's not as snappy as "Don't Say Gay," but I think it's more accurate). \

This also illustrates how opponents of this stuff aren't just going after "graphic" depictions of sex and gender stuff, because there is nothing graphic in this book. Heck, you have to really want to see LGBTQ couples in this book (for good or for ill) to see them at all. This is not an objection to overt sexual content--it's an objection to even sort of acknowledging that LGBTQ people exist.

I learned from the Washington Post interview with the creators of the book that this is not the first time the book has been targeted, which perhaps explains its presence on this list.

As with all such events, the other major element is a nervous administrator. Superintendent Russell Hughes told local media--well, something...

What is necessary varies. I don’t know if I define the word ‘necessary’ as necessary to those who are opposing, necessary to those who didn’t want to, it was necessary in this moment for me to make that decision and I did it for just a welfare of all involved, including our constituents, our teachers, and our students. I’ll continue to do those things and perhaps add some.
The district press release makes his reasoning a little clearer.
With reports of movements underway across the state coupled with legal implications and the potential undue stress to my District and staff, I am not willing to place any WCSD personnel in the cross hairs of this kind of perilous circumstance. I want to emphasize that NO “book ban” has occurred in Walton County. Any headlines or news stories as such are misinformation, inaccurate, and false!

The Walton County School District is committed to a culture which we proudly call EPIC. I am steadfast in the vision of excellence, choosing to focus on students and academics in these divisive times. Leaders, teachers, administrators, staff, and families in Walton County are focused on end of the year assessments, achievement, and graduations, which have earned the District the #5 ranking in the State of Florida.
So, roughly, "I decided to get these books out of the way so that we could focus on doing out jobs without having to worry about dealing with controversy and citizens using their newly-created power to sue us over any book they object to." So maybe not very brave, but arguably practical.
In other words, the chilling effect of the Don't Say Things We Don't Like law is working just as designed.
In the meantime, you can order your copy of Everywhere Babies right here (currently on backorder).
Posted by Peter Greene at Saturday, April 23, 2022
Email ThisBlogThis!Share to TwitterShare to FacebookShare to Pinterest