That's the headline we're seeing all over, based on the results from an Education Week/Merrimack College teacher survey

The survey was conducted between January 9 and February 23 of this year, with a sample of 1,324 teachers. And the chart that everyone keeps zooming in on is this one-- 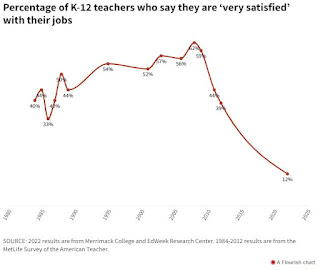 --which admittedly is pretty ugly, though it needs to be said that the Merrimack survey is in its first year, and all the other chart data comes from the old MetLife Survey of the American Teacher. I'll admit my misgivings--can a 1,324 sample really capture the full range of what's out there in the teaching profession with all the different districts, states, ages, disciplines involved? But these folks do this kind of thing professionally, so I'm going to (cautiously) take their word for it.

While the satisfaction chart is the one that will be discussed at length, there are others that jump out at me. For instance, look at this chart dealing with teachers' perceptions of their own control and influence: Not a single area had over 50% strong agreement. Barely 50% showed any agreement that they have control and influence over what they teach. And a teeny tiny 5% strongly agree they have control and influence over policies in their workplace. Which is nuts. This chart describes a profession in which folks largely have little or no control over the most critical aspects of their work, a profession in which their professional judgment counts for diddly squat.

The survey covers many of the usual suspects (51% strongly disagree that they are fairly paid), but if you want to see the roots of teacher dissatisfaction, look at that control and influence chart.

Respect data is broken down by within school, by students' parents, and by general public. Males generally feel more respected than females, and far fewer feel respected and seen as a professional by the general public than by parents--not a huge surprise.

There are some intriguing breakdowns of data in the survey. One segment looks at topics that deserve more media attention, broken down by political party and urban/suburban/rural jobs. On the item of "inequities in our schools due to issues of race or poverty," suburban and rural teacher are split. Democrats in those areas are seventy-some percent in agreement that more coverage of the topic is needed, but in Republican teachers are around 27% in agreement. However, in urban districts, while Dem numbers stay the same, 60% of GOP teachers agree more coverage is warranted. The topic that most needs more media attention, according to all subgroups-- teachers' working conditions and school climate.

There is also data about how teachers spend their time, and what they wish they could spend more time on. 31% would like to spend less time on general administrative work; 29% would like to spend more time on individual planning and preparation. According to the survey, teachers report spending over fifty hours per week in total; the surprise result here is that teachers at schools with over 75% free/reduced lunch students report 52 work hours, and teachers at schools with under 25% free/reduced lunch students reported 57 hours.

55% said they were "not very" or "not at all" likely to tell their younger self to pursue teaching as a career.

There's more to chew on here (and if you want to see it yourself, you have to register for a copy) and maybe after Easter I'll sit down to chomp away-- but these are the highlights. Watch for lots of repackaging of these results in the days ahead.

Posted by Peter Greene at Saturday, April 16, 2022
Email ThisBlogThis!Share to TwitterShare to FacebookShare to Pinterest