There was a brief flurry of excitement last fall when Governor Ron DeSantis and his education sock puppet Richard Corcoran called for an end to Florida's most recent iteration of the Big Standardized Test, the FSA.
Some folks were happy to hear the news. Others were looking suspiciously at the fine print. And now that springtime has rolled around, it's clear that the folks who were suspicious were correct. High stakes testing is dead. Long live high stakes testing. Shocking as it may seem, Ron DeSantis was just blowing smoke. 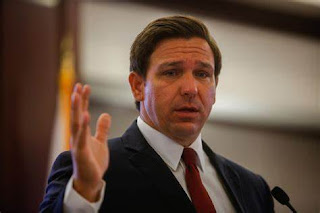 FSA has been replaced with FAST, which effectively replaces one BS Test with three "progress monitoring" tests, the third of which carries exactly the same consequences as the old FSA tests, including third grade reading retention and grading the schools.
As the Florida Education Association said when the new law was signed, "This is not what DeSantis promised, and most importantly, it is not what is best for Florida's students," which strikes me as a statement that could just be reissued pretty much every time DeSantis does anything related to education.
Florida law caps the amount of time students can spend on testing at 5% of the year. This is a silly law; it's a great idea to keep actual hours wasted on testing to a minimum (particularly since the more hours you have students spend staring at the test, the more prone testing will be to generate meaningless results), but the real drain on classroom time is test prep. Hours and hours and hours and hours and hours spent getting students ready for the test--and why wouldn't schools do that when their rankings depend on the results? And don't even open your mouth to tell me "Well, if teachers just cover the standards well the test results will take care of themselves," because you might as well say, "I am a dope who does not understand how teaching, testing or students function."
So is this transition about anything other than making a meaningless grand gesture to generate good PR with parents? I think so.
Plenty of attention has been paid to how DeSantis manages to attack and undermine public education, and I think that keeps us from fully appreciating how well he monetizes it.
As Bob Schaeffer of FairTest points out, this the fifth time in about two decades that Florida has revamped its testing.  The much-ballyhooed rejection of math textbooks has shifted the market in Florida in favor of a publisher with former ties to Virginia Governor Glenn Youngkin. Likewise. DeSantis's demand for purge of Common Core from Florida's ed standards instantly created a market for new textbooks. (Meanwhile, Florida's results still kind of suck)
FCAT. Common Core. FSA. BEST. Every time Florida revamps standards and/or tests, school districts have to drop a ton of money, and taxpayers get to shoot some more funding to textbook company, software developer, or test manufacturer. How many millions of dollars have Florida taxpayers poured into these overhauls?
Every time Florida switches tests or standards, they help somebody augment their revenue stream. The new shift in testing is not at all what he promised taxpayers, but I'll bet it makes some other folks mighty happy.
Posted by Peter Greene at Tuesday, April 26, 2022
Email ThisBlogThis!Share to TwitterShare to FacebookShare to Pinterest