Tiffany Justice, one of the co-founders of Moms For Liberty and experienced Florida rabble rouser, appeared on Steve Bannon's show to share some of her thoughts about ongoing culture battles, and at one point she laid out her plans for what comes next: 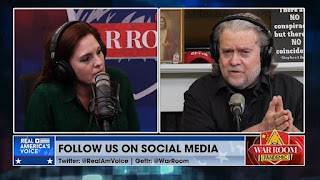 BANNON: Are we going to start taking over the school boards?

JUSTICE: Absolutely. We're going to take over the school boards, but that's not enough. Once we replace the school boards, what we need to do is we need to have search firms, that are conservative search firms, that help us to find new educational leaders, because parents are going to get in there and they're going to want to fire everyone. What else needs to happen? We need good school board training. We need lawyers to stand up in their communities and be advocates for parents and be advocates for school board members who are bucking the system. Right now, parents have no recourse within any public education district.
The "no recourse" talking point sits awkwardly next to a description of the recourse (democratic elections) that Justice (who was defeated when she ran for re-election to her own school board seat) plans to take, but sure. Parents will take over school boards, fire everybody, and hire The Right Sort to replace them. And while some training is needed for school board members, the main thing is to run, because
But what my message today is – get out and run for school board. It's a part-time job. It's not a full-time job. Anyone can do it. You do not need to have a background in education and we need more people.
Justice was on Bannon's show War Room: Pandemic, because angling for political victories and advocacy spins is just like what folks are going on in Ukraine these days. She talked about the heroism of Ron DeSantis, and of course parental rights:
Parental rights are rights that every parent has, and the government does not give them to you, and they cannot take them away. Every parent has the fundamental right to direct the upbringing of their children, their medical care. That includes mental health, by the way, their education and their values, education, their morals, their religious and character training. All of these things lie within the responsibility of the parent. We, as parents, are happy to own those responsibilities within our rights.
It underlines the way in which the parental rights movement at its most extreme seems to have nothing at all to do with a children's rights movement. I'm a parent, and I absolutely get the rights and responsibilities that parents have to protect and guide their children, but there's a line past which it all starts to become creepy, as if you own this child and will engineer the tiny human to turn out to be exactly what you choose them to be, and much of the parental rights activist rhetoric lives close to that line. "I have total ownership and control of my child" is exactly how you get to the notion of "My child didn't turn out exactly the way I demanded they turn out, so somebody else must have messed with their head." Parental rights are a real thing, and parental responsibilities are a very real thing, but children are actual human beings and not lumps of clay to be crafted by other adult humans.
Justice and Bannon are sad that folks are lying about Florida's bill, which is just a parental rights and anti-grooming bill and not-- they interrupt themselves before they can say what it is. But Justice says she doesn't see the big deal "We said no sexual orientation instruction or gender identity instruction in grades K through three" and many of her fans and Bannon think is should be K through twelve. Yes, why is everyone so upset that supporters of the bill equate teachers, LGBTQ persons, and pedophiles? (Also, implying that Disney only opposes the law because they are interested in sexualizing children.) As with all talk in support of the law, Justice and Bannon skip past the part where any parent can decide for themselves what constitutes "instruction" about sexual orientation or gender identity, so teachers now have to watch out for any lesson that could lead to Pat talking about having two Mommies at home. Though it would be entertaining if the first parent lawsuit under the bill is some parent arguing that boys and girls restrooms are a means of instructing about gender identity. Maybe fans of the law should just wait until we see how the court challenge turns out.
Justice throws around some numbers about public school failure, which serve mostly as a good example of why school board members and other people who want to talk about education policy should know something about it (she cites 29.8% of Kentucky third graders reading on grade level, but she appears to be talking about proficiency, which is above grade level). This, somehow, is related to talking about gender identity and sexual orientation in first grade.
Justice could be on the show because she was in DC to talk to some GOP House members. She can't imagine why Dems don't want to talk to her (I'm not sure, but one possible explanation that comes to mind is that she didn't call their offices to make an appointment). Which brings us back to the point at the top-- Moms For Liberty wants to talk about how to take over the states (because states rights are at the heart of all this stuff).
Posted by Peter Greene at Friday, April 01, 2022
Email ThisBlogThis!Share to TwitterShare to FacebookShare to Pinterest