Things My Father Taught Me

My father is in his mid-eighties and still plenty peppy. Still the smartest person I know.

He and my mother celebrated their 65th wedding anniversary last week. They got married the summer before she started a teaching job and before he started his senior year of college. One of his graduation pictures includes infant me. Who let those children get married? 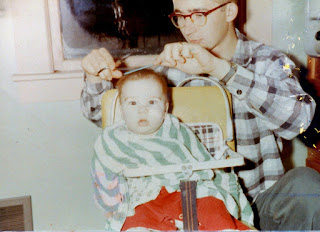 By the time he graduated, he had a solid job lined up engineering for an underground mining equipment company. He'd earned that kind of gig by being a hard working, serious student, and that was probably only because my grandparents (a general contractor and a stay at home mom who would soon have a side career in politics) sent him to Phillips Exeter Academy. He was a townie and never soaked up any of the rarified ivy league prepitude of the place, attending the University of New Hampshire.

He worked at the same company his whole life, eventually becoming one of the top managers. He had a reputation for memos marked by "dry, pithy witticisms," and he always played things straight. He was conventional and by-the-book, but still human; at lunchtime on the last day before a holiday break, he would go out and announce loudly to his secretary that he had work to do at one of the other plants and he would not be back the rest of the day (translation: if anyone leaves early, I won't ever know). When the company began to cycle through a series of hedge fundy type owners, he became a bit of a stealth rebel, which took a psychic toll on him, but an endless line of folks have told me that it helped keep the company alive.

He doesn't drink. For most of his life he wore white socks for everything. He has a huge library of big band music and is a Glenn Miller authority (he's not old enough for the OG Big Band Era, but he got swept up in the late-fifties revival). He has rebuilt a few antique autos over the years; when we were growing up, he used to drive the neighborhood kids around in a 1914 Federal Fire Truck ("Federal" is a brand, not a political designation).

Now that he's retired, he and my mother run an antique music museum, filled with various types of mechanical pianos and band organs. We offspring joke that he left a job working 40 hours a week for pay so that he could work 60 hours a week for free. 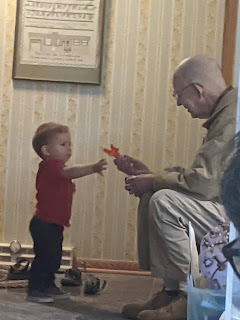 I learned a lot of things from my father. Some of it involves mechanical stuff; I had to go to college to discover that being the least car-handy person in my family still made me the most car-handy person lots of other places. I learned that when shopping, if it's a good deal, it's still a good deal even if you later discover a better deal, which seems like a lesson in commerce but turns out to be a lesson in not allowing circumstances to steal your satisfaction with life's moments.

Once I had played an elementary band concert, and I was aching to get out of there, but my dad stayed and helped put away chairs. I asked why we couldn't just get out of there and he said that if something needs to be done and you're able to help do it, then you should. That stuck with me. And you do the best you can, even if it's a pain. And you finish what you start. And, though he never said so, he has always made it clear that you put your energy into doing the work, not in trying to promote how yourself for doing the work. And get it right. Also, show gratitude. Don't waste sweat and money on stuff that doesn't matter. And take care of the people around you. My father had a very successful career, and he and my mother have always lived modestly, and quietly spent a bunch of money on people and causes--nobody knows how much, including we kids.

But in some ways, the big lesson I learned from my father is that you never stop growing. Did something grab your interest? Go learn about it. Do new stuff. Embrace new people. Keep growing up as a person. After all these years, I have still never known my parents to hunker down and say, "Enough, already. We're just going to sit over here and let the world move on ahead."

Also--and people who know my father may be surprised by this--but I also look to my father as an example of grace. I have provided ample opportunity for my parents to tell me that I've let them down. I say this may surprise people simply because my father has never made a big production out of forgiveness or working through feelings of whatever. He has just always been there. I suspect it's sort of a New England male kind of thing; you don't need to talk about it--just be there and keep doing the work.

Fathers Day is nice as a celebration of fathers and all that. But it's also a good time to stop and think about how are fathers are reflected in who we are, a good way to remember that we didn't make ourselves, that we are carrying forward from previous generations and should be mindful about what we pass on to the next. And if that's not a good reflection for teachers, I don't know what is.