Buffalo, NY, primary voters tossed out a four-year incumbent in favor of India Walton, a nurse and self-identified socialist (as oppose to someone targeted with the S-word by cranky conservatives).

Buffalo is a busy city for charter schools. It is where Carl Paladino put on a master class in how to use charter schools to make a profitable real estate empire. At one point he got himself elected to the school board where he was a vocal advocate for charters. He was never particularly shy about making a mint from the charter biz. ""If I didn't, I'd be a friggin' idiot," is a thing he actually said out loud to the Buffalo City News. The board often tried to shut him up (he was not just a charter fan, but racist, sexist and loud about it), but it was eventually the state that removed him from the board during his second term. In 2017, Commissioner Mary Ellen Elia removed him for disclosing sensitive information from a closed-door board session. 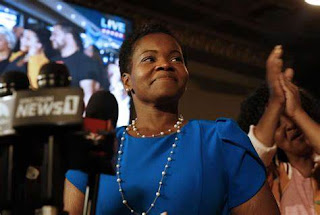 But you did notice that was his second term. Because Buffalo voters re-elected him. Buffalo has around 20 charter schools operating, and there is concern that Walton would be an anti-charter mayor.

The Buffalo News broached the subject with her back at the beginning of June. I'll include the audio, which is brief, but here are the highlights.

Walton has a charter push-out story of her own. Her son requires an IEP. The charter in which she enrolled him set the condition that he could not be enrolled unless she waived that IEP. After a few months, she was brought in by the school, which told her he wasn't performing well enough and she could either pull him out or they would expel him (which, they apparently suggested, would go on his "permanent record").

Asked by the newspaper if she had heard that this was a widespread issue or just her own personal experience (a fair question) she noted that as a school nurse, every October and November she would have to process a large number of students returning to public schools from the charter schools. That's not an uncommon experience; in many states, charter enrollment is counted in the fall, and afterwards, even if the student leaves, the charter keeps the money that "followed" the student there, so there is no penalty for the charter pushing out students that are too difficult or costly to educate.

So Walton may not be actually anti-charter, but she is familiar with one brand of charter shenanigans. She still has to defeat whatever sacrificial lamb the GOP puts up for the general election, and defeated incumbent Byron Brown is hinting at a write-in campaign, but India Walton could be sign of interesting times ahead in Buffalo.

You can listen to the audio here.