IN: Voucher Increase To Serve Church, Not Taxpayers

Today's Catholic (Serving the Diocese of Fort Wayne-South Bend) offers an article that gives a good picture of what vouchers really do. After all the rhetoric about choice and free exercise of religion, what are taxpayers really paying for? 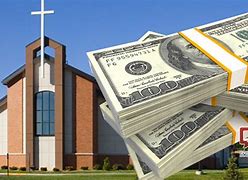 Indiana has had a huge voucher program for ten years, and this year, the state budget included a big expansion of the program. The Indiana Catholic Conference lobbied for that expansion, which would "give more middle-income parents the option to choose a faith-based education for their children." Well, yes, because six-figure income families are now eligible.

That emphasis on religious education is the whole point and purpose.* Dr. Joseph Brettnacher, superintendent of Catholic schools for the diocese, lays out the mission:

The most important aspect of the Choice expansion is that more families will have the ability to send their children to faith-based schools, where students can develop a personal relationship with Jesus Christ within His mystical body, the Church. Our goals for students are to create disciples of Jesus Christ, help them fulfill their destiny to become saints and reach heaven.
The use of public tax dollars to fund this religious mission is not news in Indiana, where the result of the 2011 law was to send 97% of the voucher money to Christian schools; 66% to Catholic private schools.
The boost works a couple of ways. Indiana has vouchers that used to be tiered by family income; now every body will just get the max amount. They also have a Tax Credit Scholarship program, in which wealthy donors can contribute to funding private schools as a substitute for paying taxes. Tax Credit Scholarship programs typically have a cap, since every dollar put into the program leaves a corresponding drop in state revenue. Indiana will be raising that cap by a few million. 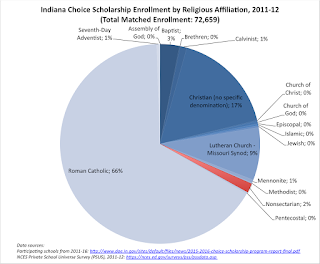 The Today's Catholic article is refreshingly clear. There's no talk here about helping poor families get a better education for their children or the superiority of a Catholic education. Instead, it talks about giving well-to-do families that already intend to send their children to Catholic school "room to breathe." They interview one family that moved to Fort Wayne in order to have access to a Catholic school and is now absorbing the news that they'll be getting more tax dollars to do it.
“We’re still kind of wrapping our head around it, but we think it will help us to be able to do the other activities they’re interested in – the sporting events, the camps, the extracurricular things outside of school,” Glenn shared.

“I feel like this is going to help us tremendously to be able to do those things more often: go to the zoo, go to the movies,” Glenn said. “We’re excited: This is going to take some of the stress off our shoulders.”
So there it is. Hoosiers are going to pay taxes so that this family can go to the zoo and to the movies, and so that the kids can become saints and reach heaven.
The diocese has been clear about who to thank:
Key to the success of the legislation that has opened the doors of Catholic school education to so many, was, Brettnacher mentioned, the work of Indiana Speaker Todd Huston, Rep. Tim Brown, Rep. Bob Behning, Sen. Rod Bray, Sen. Eric Bassler, Sen. Ryan Mishler and Sen. Liz Brown, among others.
Those are the folks who helped insure that Hoosiers would pay for religious education, whether they feel inclined to offer up financial support in the name of that God or not.
*On Twitter, one commenter pointed out that white flight would like a word. That's fair.
Posted by Peter Greene at Tuesday, June 08, 2021