There's nothing new to see here, but it's still worth noting what DeVos tells us about her priorities.

From a recent interview with a conservative Christian podcast-- let me just set these side by side:

"I was fortunate enough to be born into a family that raised me to make my faith my own," she said. "I had exposure from my first memories to weekly church services."

"I'm grateful to have had that foundation." 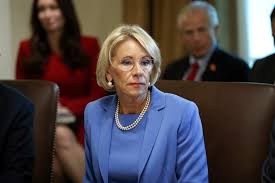 Note that DeVos is not waxing nostalgic for the days when her parents made her aware of the different faiths out there, leaving her to choose the one she liked best. No, she is grateful for a foundation built in what she believes is the only correct choice.

I've made this argument before; people don't really want choice. What they want is to have what they want. DeVos is not different. If her own church had been the only church in town when her kids were growing up, I don't believe for a second that she would have fought to get other houses of worship opened up so that she could have choices.

It's extremely human (maybe even necessarily so) to think some things are better than others. Pressed for an explanation for the $4.7 billion cut to education in the proposed budget, DeVos answered:

The administration has priorities, and we had to make difficult decisions around the entirety of the budget.

Unfortunately, the Senator whose question she was answering/not answering chose to reply with am zinger instead of probing for a more specific description of what priorities DeVos considered more important than the programs that she wanted to cut back, and why. Or why, given the Trump administration's to spend hundreds of billions of dollars more than they had, she didn't just tack that $4.7 billion onto the already-massive budget deficit.

But she gave some answers at another point in the hearings that clarify. Another proposed cut in the budget is the end of the college loan forgiveness program for people entering public service. Yes, it would just plain save the government money, but there are more philosophical reasons:

In other words, we'd rather not encourage people to go into public service, because we don't feel public service is more important (or maybe even as important) as serving as a needed meat widget for private industry. In fact, since the government should be really tiny and cost next to nothing, it would be best if nobody worked for it, because really, these "public service" jobs are just government jobs, many of the used to fuel those damn public sector unions (like the twice-damned teachers union, which we really need to finish breaking one way or another, and, yes, that's DeVos brother Erik Prince hiring spies to infiltrate the teachers union and the DeVos-funded Mackinack Center trying to convince teachers to quit the union). If we can convince just one person to become a cog in the corporate machine instead  becoming a teacher or a firefighter, well, then, that's been a good day's work.

As a free market devotee, DeVos is perhaps more inclined to think that the public should serve itself. Certainly, as she has told us in many was at this point, her priority is not to have the public served by a government that has the scale and resources to get the job done. She has told us that public education is a "dead end" by which she means a monopoly or "closed system," by which she means private operators are being denied the chance to make money doing it. She has told us that government "sucks." In other words, she's been quite clear, despite the occasional attempt to be more diplomatic, that public schools are not a choice that needs to be on the table. Not a priority.

Posted by Peter Greene at Monday, March 09, 2020
Email ThisBlogThis!Share to TwitterShare to FacebookShare to Pinterest