Think of this as part of a series on ed tech tools that can actually be useful, now that some folks are being required to use them.

Some of my teacher friends are discovering the joys of on-line class discussions, and I myself was always a fan. The best ed tech doesn't supplant the classroom, but extends its reach, and the on line discussion format offers several appealing features. 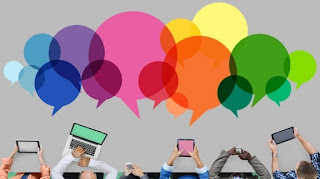 Most importantly, it shifts the balance of power. Live class discussion favors the talkers; on-line discussion favors the writers. If you get a good system in place, you will see students who rarely say boo in class suddenly becoming powerhouses of discussion. There is also something about typing that prompts a level of honesty and openness that you don't always get in class. As roughly sixty gigazillion examples on the interwebz show us, people write things in front of everyone else that they would never say in front of everyone else. This force can be harnessed for good in your class.

As with all software, little things matter. I started on-line discussion groups with Moodle, which offers a threaded discussion feature (what many interwebz oldtimers will recognize from their favorite old bulletin board systems), and that worked great. When we were forced onto a different platform by the district's IT department, that platform offered discussion-- but in a clunky format that wanted to be Facebook and so copied Fbook's "we'll put responses to this post in any old order" feature, which was a discussion-killer. Google--well, Google brings the same deft touch that they brought to the massively failed Google Plus.

You also need to put some requirements in place. Absolutely no fake names-- everyone must post as themselves. And links to sources-- none of this "I read some article that said..."

One of the challenges was getting students to participate. I created a requirement (start at least one thread, post responses on at least two others), but it became an excellent example of how you can make people do something, but you can't make them do it well. Moodle had a genius feature that harnessed the power of judgy teenagers; I had the option of letting everyone give every post or response a score from 1 to 5. This instantly ended the practice of posting a quick "Yes" or "What she said."

There are plenty of forum platforms out there, though you'll likely be restricted in the long term by what your IT people are willing to do.

The on-line conversations can provide some useful springboards for in-class discussions, even essay assignments. And they can make rock stars out of your more introverted students. If you are being required to hold class "remotely" during this mess, on-line discussion is worth experimenting with, because it will still be useful when you're back in a classroom again.
Posted by Peter Greene at Tuesday, March 17, 2020
Email ThisBlogThis!Share to TwitterShare to FacebookShare to Pinterest