You may recall that Betsy DeVos really, really, really hates the idea of forgiving the loans that students took out to attend what turned out to be fraudulent predatory not-so-good for-profit universities, to the point that when she had to sign off on loan forgiveness paperwork left over from the previous administration, she felt compelled to add "with extreme displeasure" to her signature. 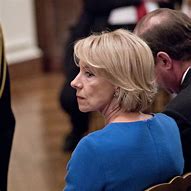 Either the department had some real problems executing the requirements of the rules requiring loan forgiveness, or they implemented an impressive federal-level program of institutional foot-dragging and deliberate "gosh, we'll get right on that" bullshit. I'm pretty sure I have a good idea which one Judge Sallie "I'm not sending anyone to jail yet, but it's good to know I have the power" Kim was thinking as she fined DeVos and the department.

All of that was just a warm-up for the main event, in which DeVos rewrote the rules of loan forgiveness. Her sales pitch was "It will save the taxpayers $11 billion," but that was because she rewrote the rules so that almost nobody was going to be forgiven. Economist Doug Webber was one of many to point out that it was mathematically impossible for many of the affected students to ever get full reimbursement. DeVos called the formula "scientifically robust," but since she'd already testified that she didn't think all of These People should get forgiveness, it was clear what she was robustly pursuing. Students had to prove that the school was deliberately lying, and they had to prove that they had been harmed. Meaning you had to prove that you wouldn't have been poor anyway, because if you were going to be poor anyway, then being bilked by the school hadn't really hurt you.

It was all part and parcel of the DeVosian favoritism for businesses over, well, anybody who doesn't own a business. But this saga has yielded one extraordinary not-awful moment-- a bipartisan agreement by the current US Senate.

No kidding. The Democrats in the Senate determined to undo the DeVos rules, and ten GOP senators actually joined in. They even used one of those funky obscure senate rules to do it, thereby pleasing the many, many, many groups opposed to DeVos's rule. Trump could still veto the thing, but as always, it's not clear that he really follows much of what's going on in the DeVos department. Also, I understand that he has a few other issues on his plate right now.
Posted by Peter Greene at Thursday, March 12, 2020