Pennsylvania's legislature is currently having Version 2,433,672,127 of the same argument that emerges every five minutes in the places where charter schools and public schools bump up against each other. The PA legislature just passed a suite of charter school bills addressing a variety of issues, but not the single issue that folks on all sides want to have addressed:

Absent from all four bills is any mention of the elephant-in-the-room issue when it comes to charter schools, namely how they are funded.

School districts complain that the bills to educate resident students who choose to attend a charter school are one of the largest expenditures in their budgets. According to the Pennsylvania Association of School Business Officials, 37 cents of every new dollar that districts raised from property taxes in 2017-18 went to charter schools.

Charter schools, meanwhile, complain they are underfunded because the amounts they are paid are less than what a school district spends to educate their own students.

Public schools are getting hammered by the loss of public tax dollars that have been diverted from public school finances into charter and choice school accounts. Charters, having forgotten the era when they bragged that they could do more with less, complain that they are underfunded compared to public schools. 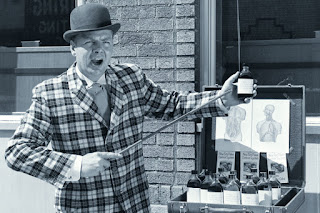 The problem here, as with several other choice-related issues, is in a false premise of modern school choice movement. That false premise is the assertion that we can fund multiple school districts for the same money we used to use to fund one single public system.

This is transparent baloney. When was the last time any school district said, "We are really strapped for funds. We had better open some new schools right away!" Never. Because everyone understands that operating multiple facilities with multiple staffs and multiple administrations and multiple overhead expenses-- all that costs more than putting your operation under one roof.

Adding charters and choice increases educational costs in a community. Sometimes we've hid that by bringing in money from outside sources, like PTA bake sales to buy a public school office equipment, or pricey benefit dinners for charters, or increasing state and federal subsidies to help charters stay afloat.

But mostly school choice is the daylight savings time of education-- if we just shuffle this money around in new and different ways, somehow there will be more of it.

This trick never works. And we talk all too rarely about why it never will.

The reasons for avoiding the financial elephant in the educational parlor are several. For some choice advocates, it's a feature and not a bug. It is hard to look at, say, Florida's legislature and not conclude that they are fully aware that they are starving public education and they're perfectly happy about that, that the hope is that public education can be shrunk down to nothing. DeVosian dominionists like that idea as well; I've heard more than a few religious conservatives declare that it's time for the church to take schools back from the government. Starve the government, starve the evil teachers' union, shrink the whole public system until it can be drained out of the proverbial bathtub.

There are other choice advocates who are sincere believers in a hybrid system in which charters and public schools coexist, thrive, and help each other. But even among those folks, there's nobody who has the political will to say to the public, "We want to expand our education system into a beautiful spread of shiny options, bringing freedom and choice and other swell things to education, but to do it will take a lot more money, so we're going to have to raise your taxes to get it done."

And so the lie persists, the false notion that we can education 100 students in either one school or in ten different schools, and it will cost exactly the same amount. Maybe if we pass the money through a different set of hands in an tax credit scholarship or some other kind of super-voucher, it will somehow multiply.

Of course, if money were no object for all students in education, we'd already have public schools so great that the subject of choice would never have come up in the first place. But the defining trait of US education has always been that we want a Mercedes at Kia prices, and Those Peoples' Children should just use a bicycle. (and teachers should only have their wages raised when they reach the point that they're actually embarrassing), and we definitely don't need to talk about using money and resources to improve the societal conditions that create the environment in which education occurs.

Despite my reputation as a charter hater, I can actually imagine a world in which charters would be a useful addition to the educational landscape-- but it would be a world without magic. The falsest promise that choice advocates have made is that somehow we can have a super-greater education system without having to actually pay for it. That kind of magical thinking is not going to help anybody except, of course, the hucksters with snake oil to sell.

Posted by Peter Greene at Friday, June 14, 2019
Email ThisBlogThis!Share to TwitterShare to FacebookShare to Pinterest