I had my first encounter with computer programming in a college math class in 1978. Turing machines, if-then switches. Fun times. A year or so later, I took an actual programming course; we wrote programs in BASIC on punch cards. Really fun times.

Software and hardware have changed, but not so some of the most basic lessons I learned at the time, and one of the most important lessons about computers is this. 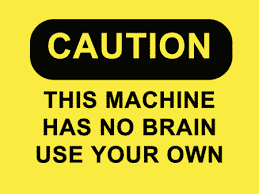 They are tireless, and they are insanely fast. But they are stupid. And as we contemplate the increasing wave of edtech products that claim to have artificial intelligence baked in (though in virtually all cases what's actually baked in is a complex algorithm), we must remember one simple truth about these stupid, stupid machines.

A computer cannot do anything that a human does not know how to do.

Take for instance the many programs that now claim they can read a student's character and personality by monitoring facial expressions and answering patterns. The first question we have to ask is, are there any human beings who know how to do that?

Is there any person who can look at still pictures or video shots of a single human face and definitively analyze that person's character?

There may well be actions that a human could not complete, because it would take a gazillion person-hours to do it, like compute Pi out to a zillion places-- but a human still knows how to do it, and so a human can tell a computer how to do it.

The answer to all of these is "no." And that means that a computer program can't do any of these things, either.

When someone presents you with a computer program that allegedly does something magical, the question to ask is, "How can it do that, exactly?" If no human knows the algorithm for achieving that goal, then no computer programmer knows how to tell software to achieve that goal.

Computers are not magical. They're just fast, tireless, persistent, and stupid.
Posted by Peter Greene at Thursday, September 21, 2017