Dolly Parton is a national damn treasure, but one Kentucky state senator had the guts, briefly, to express concern about Parton's signature philanthropic effort being a piece of the Great Indoctrinatin' going on in America. 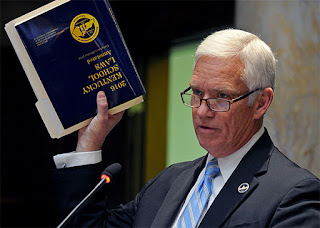 Stephen Meredith was a hospital CEO before being elected to Kentucky's senate in 2017. Wednesday he was in committee discussing SB 164, a bill for creating a state partnership with Dolly Parton's Imagination Library, one of the best examples of thoughtful, useful, not-trying-to-take-over-a-government function philanthropy you'll find. The Imagination Library puts books in the hands of children 0-5. Once a month, a free book arrives addressed to your child. The Board of Directors has been signed up since birth; the books are wonderfully curated, selected for age appropriateness and an absolute model of blending classic and new and diverse books. It is literally one of the best things a wealthy person has ever done.

But Wednesday, Meredith had some concerns. Noting that the bill had "age appropriate" in the language, he wondered "if that shouldn't include subject appropriate as well"... "given today's environment."

Sigh. Okay, I don't know Meredith, so maybe what he meant to suggest is that they needed to head off crazy-pants CRT/LGBTQ protestors so they wouldn't descend upon the bill. But he did note that he's heard about "inappropriate literature" given to pre-schoolers. And he also notes that "players change over the course of time, and things get shifted," so I guess he's worried that Indoctrinators might somehow take over Parton's program.

Stella Parton, Dolly's sister, was having none of it, and on Thursday morning she was on Twitter calling him out:

I'm outraged this morning that anyone, let alone a GOP Sen. Meredith from the grat state of Ky. Would question my sister Doly or even insinuate something sinister about the "Imagination Library" for children. Appalachian people have been maligned as uneducated and to have a Senator from Appalachia state even think this much less say anything derogatory about this incredible program is an outrage!! I would like to see your IQ score Sen. Meredith along with at least a dozen more of you GOP nimrods. The next you know, you will be trying to burn children's books.

Most new outlets have edited her response down a bit. As you can see, she was pretty pissed. She also accused him of using the phrase "indoctrinate the children," which he didn't. The whole blow-up was enough to make Dolly Parton trend on Twitter Thursday.

Meredith told a news reporter, "I'm disappointed, but you know, that's social media today." In the end, he did vote for the bill.

If nothing else, the flap suggests that there are limits to what folks can say in their pursuit of anti-indoctrinatin'.

Posted by Peter Greene at Friday, March 04, 2022
Email ThisBlogThis!Share to TwitterShare to FacebookShare to Pinterest