I've been directing school and community theater productions for a long time, and I've learned a lot, much of which directly parallels the work of a teacher in the classroom (there are plenty of ways to frame teaching, but for me it has always largely been performance). Here are a few.

Don't Waste Time Pining for the Cast You Don't Have

In professional theater, you can afford to be picky. In community/school theater, not so much. You get what you get, and that's what you have to build a show out of. You can't try to lead the cast as if they were other people with other skill sets; you have to take them where they are and build from there. 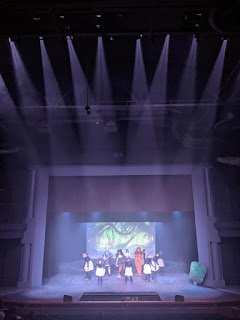 Sometimes this leads to great things you hadn't really planned for. Every community theater director has a tale of gender-switching a role, pretty much always turning a male character female (because way too many roles are written for men, and men are not what you have an excess of in community/school theater). And it turns out that some changes strike cool little notes--for instance, when Belle in Beauty and the Beast has a wacky inventor mother rather than a wacky inventor father, it strikes some interesting deep notes.

But you absolutely work with the cast you have, not the one you wish you had. And you don't view the cast you have as "less than"-- just different from the one you imagined. Ditto for your class. It's a toxic waste of time to be frustrated with your students because they aren't other students (e.g the awful "Last year's kids didn't do this")

You Don't Do It Alone

I've never worked a show in which I did not desperately depend on the work of costumers, tech folks, set designers and builders, and all the people working hard but invisibly as the show runs. Teaching often looks, and feels, like a solitary profession, but in the classroom you are leaning on the work of other members of your department, your students' previous teachers, the school's support staff, the special ed department, the building administrative assistants, and, if you are fortunate, your administration.

On stage and in school, you have to learn who you can trust and depend on, and for what, and how much. Building a support network is hugely useful.

In community/school theater, it's not just about the actor's performance. You have to answer questions about how we'll build that piece, how we'll light that moment, how we'll store those set pieces off stage (fun fact--the awesome community theater I work in has little wing space and only enough fly space to "hide" something that's no more than seven feet tall). Failing to figure out the nuts and bolts has sunk many a production, and many a lesson. "That will just happen, somehow," is never a plan. Even if you think you've bypassed the problem by staging Our Town or some minimalist production design, you'll find you never really have.

Leave Room for Things To Happen

I've seen directors micromanage shows, telling every actor and every production staff member exactly what to do, detail by detail. It's a rough way to go--it robs everyone else of their agency, and it means the quality of the production rests entirely on the auteur being right about everything, all the time, every time. It also requires the director to exert, even waste, a great deal of energy and power bending everyone else to his will. It creates a toxic environment, an environment that people will walk away from. This kind of thing persists only because of the persistent myth of the awesome genius whose brilliant vision redeems his toxic behavior.

We have the Visionary CEO model of school management, the goal of "teacher-proof" classes that script a teachers every word and move, and the classroom of the "genius" teacher who demands total compliance from every student.

All of these are problematic for the reasons given above, but there's one more issue to consider. As a director, I find that when I leave room for actors and crew to create, imagine, extend and just generally fill in the spaces, wonderful things happen. It's a tricky balance-- you can't just say, "Everyone go out on stage and move around the way you feel like moving," but you have to leave some space for what they want to bring to the moment.

The more one insists on total control in a classroom, the less opportunity there is for real things to happen, for students to bring a direction and energy to the classroom that allows learning to erupt. Doesn't mean the teacher just sits back and does nothing--as with all things in a classroom (and life), balance is needed. Total control does not offer healthy or robust balance.

Success Doesn't Always Look The Way You Thought It Would

If you are adamantly welded to one vision of a scene, you will miss other opportunities that present themselves as you work through the process. I believe this is pretty much a major rule for life, so on stage and in a classroom, it make sense to me that it would also be true. This doesn't mean you can't hold fast to things that you value, but every vision can be tempered with time, experience, and circumstances that you didn't foresee.

In community theater, it's great to have big ideas and to push the envelope of what your space can handle. But it's practical to have a Plan B (and possible Plans C through Z) because maybe that cool set piece won't work properly or something won't get built because the set guy had to spend the week on a family emergency (because everyone in community theater has a job and a life outside of the theater) or your lead won't be able to learn to juggle after all. So you move on to your next plan. And that's okay.

If You Focus On Your Objective, You Are Hard To Derail

So this weekend, we used fog for our production of the Wizard of Oz, and it worked successfully all week--and then on opening night, it set off the fire alarm. Blaring honks, flashing lights, and the actors just kept doing their thing, and so the audience, with almost no hubbub, sat there. If you know what you're doing, and you keep focused on doing it, you are hard to move off track. True in the classroom as well. I never could quite understand teachers who were flummoxed by, say, an administrator popping in. Keep your eye on that destination and keep pushing toward it.

Everyone ought to do a little theater, on stage or behind it. It provides some useful perspective and some helpful lessons.