A curious new pro-choice argument has surfaced in these days of sturm and drang, exemplified by the Cato Institute Battle Map, on which the Libertarian thinky tank tracks the public schools in the midst of some sort of battle over policy issues.

The argument here, pushed daily on Twitter by Cato's Neal McClusky, is that "public schools leave people no choice but to be at each others' throats" and that the system leaves no choice but to either ban or impose policies and ideas. Therefor, the argument goes, school choice offers a chance to make all the conflict go away. Folks over here can choose a school that actively pursues diversity and anti-racists policies, while folks over here can choose a school that actively blocks such policies. Allowing diverse school approaches will, the argument goes, somehow reduce the conflicts currently tearing at the social fabric of our country.

I have several problems with this idea.

This kind of choice has serious limits.

So first we get a school that separates from the original public district so that it can keep out all sorts of diversity and anti-racist programs. But then that school splits over a conflict about whether or not to teach creationism. Then the creationism school splits over an argument about which books to ban from the school library, and then that school splits over policies regarding LGBTQ+ students. The continued spinning off of entities based on new policy disputes will be familiar to anyone who knows the Protestant church. Meanwhile, many parents will factor in location and student body demographics for their decisions, and of the many schools spun off to "settle" the various disputes, half will fold because they don't make enough money. 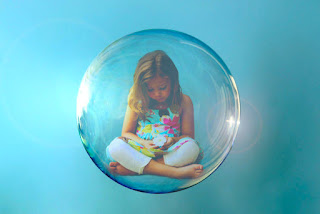 In the end, "Well, if they don't like that policy, they'll be able to choose a school with which they agree," will turn out to be a false promise.

Some choices are not healthy.

We have seen the use of school choice to avoid conflict before. After Brown v. Board of Education, lots of folks decided they had a problem sending their white children to school with Black students, and they "solved" that conflict by creating schools that let them choose segregation. When it comes to the current CRT panic, there may well be some schools that have gone a step too far with their anti-racist work (though--plot twist--those schools keep turning out to be not public ones). But an awful lot of the panic is fueled by folks opportunistically whipping up some good old-fashioned white outrage over encroaching Blackness, and we've been here before.

Bubbles do not banish conflict.

I agree with the part of the premise that says, more or less, "Holy crap, but we are spending a lot of time arguing bitterly and separating ourselves into chasm-separated camps!" What I don't get, at all, is how separating the children of these warring factions into their own separate education bubbles is going to help. How will having been immersed in nothing but the particular view of their parents' camp prepare them to be workers, neighbors, and citizens in a society where other people with other views exist.

Upon graduation, will they proceed to a college or trade school that is also designed to strictly fit with their parents' beliefs? And then will they search, diploma in hand. for employers who also embrace only the world view that these well-bubbled citizens have been taught is the One True View?

How does growing up in a bubble prepare you for life outside it--particularly if your bubble teaches things that are neither nuanced or accurate views.

Sometimes conflict exists. For any number of reasons, most related to how humans function and that this country has many such humans around. When conflict exists, the only way out is through. Our current problem is not that we have conflicts--that's normal. Our problem is the large number of people who believe (and are encouraged to believe) that conflict is "managed" by obliterating the people who disagree with you. But we need improved conflict management skills (which is a whole other post), not conflict avoidance techniques. Take it from a guy with one failed marriage in his rearview mirror-- when conflict exists, it can never be avoided, but only postponed, and while it's waiting, it sits in escrow and gathers interest.

See above. A young adult who has been brought up to believe that slavery was not so bad and all racial problems were fixed around 1960 and Civil War generals are great American heroes--this is not a person who is poised to live harmoniously with POC in the 21st century.

Yes, this is all really hard.

Yes, it's a challenge when many people have different visions of what education is supposed to be and do. Yes, sorting out conflicts in a pluralistic democratic-ish society is messy. Yes, it can become tiring that "solutions" are really just a process of balancing between various forces in tension and so is never, ever done and settled. Yes, it can be alarming that the forces in tension sometimes include a pull in a direction that seems clearly wrong and dangerous. And yes, it's a pain when the times call for you to stand up and "fight" for what you think is right. But there we are--welcome to life on this planet as a human being, where the "solutions" to these conundrums always turn out to be destructive and wrong and not-actually-worky.

As I have said periodically, there are legitimate arguments for school choice. But this is not one of them.

Posted by Peter Greene at Friday, July 23, 2021
Email ThisBlogThis!Share to TwitterShare to FacebookShare to Pinterest