It was not so long ago that Pennsylvania's Governor Tom Wolf made charter supporters sad by rejecting the claim that charters are public schools. Today, he took another step and put charters in PA on notice.

At a news conference at a school in Allentown, Wolf said he would take executive action to change state regulations for charters, including tightening ethics standards. He also said he would push to revise Pennsylvania’s charter law, which he called “one of the most fiscally irresponsible laws in the nation." 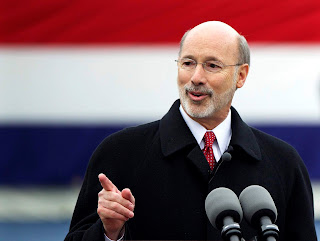 Wolf also said that the current system "isn't good for anyone," harkening back to 2016 when the Auditor General called PA charter laws “simply the worst charter school law in the United States.” And he also gave special mention to cyber-charters, which have become a boondoggly cash grab of epic proportions in Pennsylvania.

What he will do, exactly, is unclear. There have been some bills that were lofted this year that would provide some good ideas-- like the bill that made it so that a school district would pay cyber-school tuition only if that school district did not offer a cyber-school option of their own. Heck, it would be nice to see a simple rule that said that charters could never again claim (in their taxpayer funded marketing materials) that they are "free." Rather, make them state publicly that they are funded with taxpayer dollars.

Wolk's executive order seems designed to bring charter oversight and transparency laws in line with those of state actors, along with yet another attempt to fix the funding problems.

Wolf acknowledges that with a GOP lock on the legislature, he's limited in options. The PA legislature has repeatedly proposed "charter school reform" bills, and they are consistently exactly what the charter industry would write for themselves in a constant search for more freedom to make a buck.

Someone pointed out that the administration could at least pull the plug on the cyber charters that are currently operating without current charters in place, and Wolf seemed to find that idea piquant.

But mostly he's proposing an executive action (aka end run around legislature) to hit charters with ethics and transparency, two areas that are a problem in PA. And there are some signs that something might actually happen. The head of the Senate Appropriations Committee, Pat Browne, chimed in:

“The governor’s actions today are an indication of the seriousness of the concerns for the current funding of public charter and cyber charter schools and its effect on overall public school finance in Pennsylvania," Browne, R- Lehigh, said. “It has reached a crisis point creating the potential of significant detrimental effects on all of our students’ progress in school.”

Now, Browne also said that the legislature hasn't been able to solve the problem because they haven't figured out how to make both charters and public schools happy. That seems nearly impossible, because charters, particularly cybers, are rolling in taxpayer dollars, and "fair funding" will mean "less revenue" for them. Whether it's paying cybers based, not on the actual costs, but on per-pupil costs of sending districts, or allowing charters to game the special ed system, charters are highly profitable in PA. Why does their happiness even matter? Because they are investing big bucks in Harrisburg lobbying.

Wolf spoke at Allentown, one of the PA school districts that has been absolutely hammered by charter costs (a problem across the state). We know he touched a nerve because Ana Meyers, the Tea Party former PR flak educational amateur who is the current executive director of the Pennsylvania Coalition of Public [sic] Charter Schools cranked her press release generator into High Dudgeon and complained about Wolf's "audacity" in denying families their choice blah blah zip code blah blah [insert tired charter rhetoric here]. It is the same old same old complaint and it comes without a single explanation of why it would limit family choice to make charters actually accountable to the taxpayers who foot the bill. This is the standard PA charter line every time laws come up-- anything that would fetter the charter freedom to do whatever they want, collect all the money they can, and not explain a single thing to the taxpayers whose money they take-- anything like that would "trap students in failing schools" and "limit the freedom of families." You would think that charter schools are so fragile and weak that the slightest legislative breath in their general direction would just kill them and not, say, require their owners to buy slightly smaller mansions or just generally be more efficient in their frauding. You might also get the impression that PA choice programs like our version of Tax Credit Scholarships were being used by poor families, and not just kicking bonuses back to the wealthy.

So, interesting times ahead. Let's hope that Wolf is actually able to pull this off and that Pennsylvania's eternal charter free ride is, if not ending, at least slowing down.
Posted by Peter Greene at Tuesday, August 13, 2019
Email ThisBlogThis!Share to TwitterShare to FacebookShare to Pinterest