When I was put in charge of the yearbook all those years ago, one of the first things I did was change photography vendors. There was nothing particularly wrong with the studio we were using, but they were headquartered several counties away. If we were going to steer several thousand dollars of lucrative school picture money somewhere, was my thinking, why not steer it back to a business within the school district. So I found somebody who could handle the work and brought the contract back to our area.

The move had the advantage of making service smoother (if there's a problem with an picture, the office is two minutes away), but that wasn't the point.

The point is that every school district, and everybody who works in that school district, is in a financial partnership with the local community-- particularly the taxpayers there. And they all have a responsibility to be good partners. 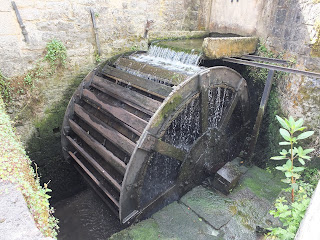 I live and work in a small town rural area; when money leaves our region, that's a big deal. If I have work to do, or goods and services to purchase, and I hire someone out of the area, that represents a chunk of money that leaves the area and stops helping the local economy work. Think of money as water and the local economy as a water wheel-- the more I direct water toward the wheel, the better it turns and the more power it generates. The more water directed away from it, the harder it is to keep the wheel turning and driving.

I have long argued that, whenever possible, teachers and school administrators should live within the communities that they serve. I recognize there are lots of practical issues here, starting with two-wage families where it's simply impossible for both to live in their district. But I have zero patience for teachers (and I know they exist because I've met them) who declare that they want to live far enough away that they don't have to run into students or parents in their off hours. No. You owe it to the community that supports you to support it.

I eat at local restaurants. I shop at local stores. I volunteer in groups that I enjoy but which I believe also enhance the community in which I live. Because every cent I've ever been paid came to me through the sacrifice of some local taxpayer.

There is no hypocrisy like economic hypocrisy. Everyone who knows me has heard my rant about people who bitch about how Bob's Widget Store is closing, but who always drive to the Big City to buy their widgets, or order their widgets on line. It's not complicated, folks-- if you want a business to survive, you need to feed it money.

It's not always easy or simple. The so-called retail apocalypse is less about people shopping on line than it is about hedtge fund managers gutting viable businesses for their own dun and profit-- Sears, ToysRUs, and the newspapers of Tronc did not have to die, but I'm not sure that local consumers could have saved them.

This is one of the problems of privatization. In the wake of the "let Amazon replace libraries" flap, Jeremy Mohler pointed out that there's a company-- Library Systems and Services-- that has been snatching up public libraries across six states, operating them with an eye on the bottom line. That represents a variety of problems (including crappy employment conditions for library employees), but one of those problems is the pipeline that now shoots taxpayer dollars straight out of the area.

Charter schools likewise often take local tax dollars and funnel them not just away from local public schools, but away from the entire local community. And so do some large public school systems that collect up big piles of tax dollars and decide that some folks will benefit from them, and some other folks won't get jack. Don't just follow the money to see who gets paid; pay attention to where the money doesn't go, too.

EdWeek notes that Amazon just scored a multi-billion dollar contract with a consortium of school districts, draining a huge pile of money away from the communities that contributed it. It's a coup for Amazon, but a loss for those communities. (It also raises the question-- if the Jobs of the Future are as packers in an Amazon plant, what does "college and career ready" really look like? A full day of phys ed class building physical endurance?)

Yes, the things we need are not always available close to home. But the closer to home we can be, the more we help the water wheels turn. And yes, it can sometimes be cheaper to buy distant-- but there are always hidden costs, and they take the form of the damage done to your local economy. And yes, you can say that none of that is your problem, whether you're a teacher cashing your check or an administrator placing an order. But if we want students to understand that they are part of a community, their fates tied to the fates of others, than we should model it. In this country, we have far too many safeguards in place to protect our delicate economic sensibilities, so that we never have to, say, confront the working conditions of the people who make all our Cheap Stuff. And given the nature of our world, sometimes we are simply parsing the least evils. But. But but but but but. Economic choices have consequences, and it does not make the world a better place for us to pretend that they don't.